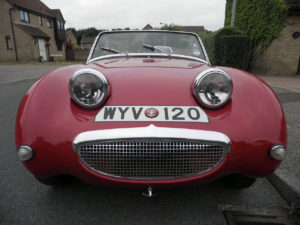 I remember the first time I saw the little Austin Healey Frog Eye my immediate reaction was I am going to look silly driving that. It was so small, cute, loveable, not very fast or powerful, the roof was a faff to assemble and thus it was all the things that I avoid like the plague with cars. Would I even fit inside it?

But the favourable reaction it got from people who I held in high regard left me somewhat embarrassed in my head to not be liking it straight away. So I gave it time. Still nothing. Fast forward three years, still nothing stirring inside me. Somehow I had always managed to avoid driving it but I never let on that I was not a fan, I didn’t dislike her, she just wasn’t my type. 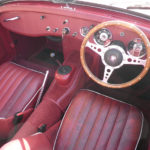 And just like the world of dating, the phenomenon of beer goggles struck me one evening, but it was rather permanent, like corrective laser eye surgery one could argue. Sitting on my sofa on my third beer I stumbled across a programme about British sports car and how they shaped the world. And there she was, a twin sister of the little Frog Eye, star of the show and I finally understood what she had achieved back in the 50’s and 60’s putting sporty open top motoring in front of the masses. Then I  recalled the owner of the Frog Eye had told me he saved his pennies from a paper round aged fifteen and bought her from Brighton, driving her back with no licence and restoring her himself, he had done a mighty fine job, he knew every nut, bolt and quirk. She was a rare too, still retained her metal bonnet clam shell. I began to think how exciting and exhilarating that must have been for him. That was living, and doing it well. And she had lasted close to fifty-five years from when she was born. She was a legend. 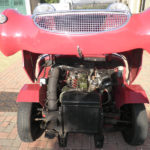 So the next day, hustling my big boat of a BMW 8 series along to work I decided today was the day, today I would drive the Frog Eye – the only car I had not driven from the huge Classic Car Club fleet. I stepped straight from a huge auto V8 into the delicate little Frog. I fired her up and straight away there was huge problem. She sounded better than my own car, I had never noticed the aggressive growl she emitted, this is what a big powerful car should sound like I thought. The agricultural gearbox and controls felt great, direct and in touch with my senses. As I pulled out of the garage I got a smile and thumbs up from a rather smart looking lady walking past…a van driver stopped to let me out and nodded in recognition…another group of young women walking past started smiling – they were not laughing at the little Frog, they were impressed with her. I had missed out on three years worth of this attention. 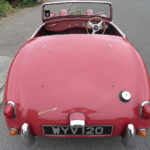 The Frog was a very easy car to maintain, superbly simple to work on and parts are readily available. Due to her simplicity she was a fairly robust car too. If I was to have my own I think a front disc brake conversion and a modern stereo hidden away somewhere would finish the whole experience off nicely.

If you fancy a classic to cut your teeth on and want to spend the odd Sunday taking something apart for the sake of it, knowing you cant go wrong putting it back together, the Frog Eye is the one for you.