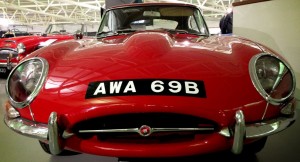 Jaguar E-Type; what makes this classic car so collectable, stylish and globally admired?

There is no simple answer to this question, as there are a number of contributing factors.  So let”s look at a few reasons why we love the E-Type.

The Jaguar E-Type is a Beautiful Classic Car

Why else would we use its photo on our own Trade Classics”s website!

The Jaguar E-Type, or the Jaguar XKE to use its proper title, burst onto the motoring scene in 1961.  It made its debut at Geneva motor show, and made headlines around the world.  For the era, its shape was a new way of thinking, with attractive and natural lines.  It was a huge step away for the box shaped cars of the time.

So aesthetically beautiful was the E-Type that even Enzo Ferarri referred to it as “the most beautiful car ever made“.  You don”t have to take our word for it, or even Enzo”s, as this beauty topped the Daily Telegraph”s online poll the top 100 most beautiful cars of all time in 2008.

In 1996, the Museum of Modern Art in New York decided to add a blue Roadster to its display, making it one of only six cars in the collection.

The E-Type is a Driver”s Car

Moving on from the obvious attraction, the second factor is the drive itself.

Mr Ferarri might have been “quick” to recognise the visual beauty of this car, but he was no doubt pretty miffed at the speed of the E-Type.  The 1961 E-Type Jaguar was a faster car than the Ferrari!  The 1961 E-Type boasted a 3.8 litre engine with a capability of 150 miles per hour (well 149.1 mph) and moved from 1 to 60 mph an impressive 7.1 seconds.

Prior to its launch the E-Type went through 5 years of concept development before its launch, and developments included the essential extension of leg room.

The E-Type is a Sexy Car

Yes folks, a car can be sexy and the Jaguar E-Type is proof of that.  The E-Type is as much a 1960″s icon as JFK and the Beatles!  It screamed a new way of thinking and was an indulgent sexy car with little place for the wife and two kids!

The E-Type was an Affordable Sport Car

Whilst being bold and trendy, the E-Type was affordable.  Of course not too all, but it became the real man”s sports car.  Working class folk were starting to break into wealthy society, thanks to means such as football and pop music; and this car became associated with the swinging 60″s celebrity scene.  The unique beauty of the Jaguar E-Type was desirable to such people.  This car started to become about being seen on the scene and reflecting your bold 1960″s attitude in the car your drove.

There is no better example of this than Manchester United Footballer, George Best, who was often photographed with an E-Type.

So in conclusion, the Jaguar E-Type is a truely collectable classic car.  People WANT one.  Either because they are the lucky ones who want to re-live their youth, or because they love what the E-Type represented and continues to represent.

Jaguar E-Type, you are a true classic car icon and we love you.

EMMA JONES
This article was written and published by Emma Jones.  Emma works for Trade Classics as an in-house journalist and copywriter and has many years” experience in the classic car sector.  Why not write a reply on this article below – she”d love to hear your thoughts on her thoughts!Also, don”t forget to check out the classic cars for sale here on Trade Classics.Google