Why do we love the classic VW campervan? 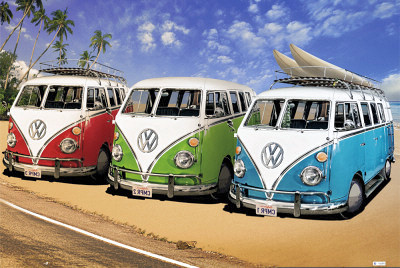 Yes it”s true, we all love the VW campervan. It is a real classic – but why? Some of them are not in particularly good condition, yet they still manage to look cool.

So is it the vehicle, or is it the image?  Probably a bit of both I think.

The van was aerodynamic, simple, and above all reliable. It was used for a number of purposes such as delivery van, milk-float and of course as a campervan.

For this purpose, its look was adapted to include the more “bay” type window (formerly it had a “split” window), although many feel that this took away some of the character. The engine size was also upgraded and the VW van of the 1970s became even more reliable, but also considerably quicker.

So much so that VW launched a campaign to reward gold watches to owners who exceeded 100,000 miles – it is said that around 160,000 watches were playned.com rewarded.

But could reliability explain its popularity both then and now?

But it goes beyond being a “cult” thing. It goes across generations. There are people of all generations who consider the VW campervan to be a classic vehicle. It is not unusual to see couples in their 50s or more, travelling around in their VW campervans. Many have personalised the look of their van and there are versions in all sorts of colour combinations on the road.

In fact, there are also many VW campervan businesses. They are available to hire for holidays, or even weddings. And of course, there are plenty of people who are interested in buying a VW campervan and therefore there http://www.phpaide.com/demos/ContactForm/ are plenty who make money by restoring and selling this classic vehicle.

Recently, I was chatting to my uncle, telling him enviously of friends who had gone on a two week camping trip in France in their blue VW campervan. These friends are successful and fairly wealthy. My uncle just could not understand why they would choose to take off in an old VW, instead of buying a newer and better-equipped campervan. I suppose that it was a logical point of view. He just couldn”t see the appeal or the coolness of the old VW.

And I guess that brings us back to the title question posed in this article. It”s not the most comfortable. It”s not the most modern. But the VW campervan is by far the most original, collectable and coolest campervan on the road. It is considered to be an absolute classic. It is most representative of the idea of the campervan – freedom!

I for one always stop and look when I pass one. One day, one day…after all VW made nearly 5 million campervans so there must be one out there for me 🙂