You are thinking of Mr Bond now. I know it. The 1975 V8 Vantage from the Living Daylights perhaps? No, wait, you are picturing the most famous car of all, the DB5 from Gold Finger. Am I right?

But I know there will be a handful of you imagining Rowan Atkinson right now…aka Mr Bean…and for the benefit of those of you who are who are still firmly focused on Sean Connery as a young man battling with Oddjob, I will explain why.

Johhny English. The spy themed comedy film starring Rowan Atkinson. Still confused? Google it please as I am out of things to tell you about it other than it stars what is quite possibly one the most complete cars from the 1990’s.

One afternoon I received a text message from my good friend Ollie. The text simply contained a link to a car, this exact car pictured above, then parked up on display at a dealership, now in his ownership, interrupted merely by a reply from me in the form of “DO IT” and a subsequent train journey by Ollie, followed by a money exchange between two parties. The unwritten rule between two petrol heads. Encourage and approve. But I meant it from the heart. I could not wait to see this car, hear it, feel it, simply to hold the key to it in my hand. 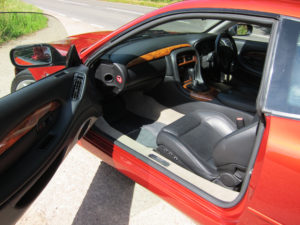 I had first seen one in a car park at Heathrow airport back when it was the current Aston available and my motoring experience comprised of a battered Cavalier and somewhat smarter Primera. Aspiring cab driver? No. Just first cars that were within my £500 budget. The DB7 sat quietly, the frosty green paintwork remaining elegant but inviting passers by to have a closer look, and upon looking myself, I couldn’t criticise anything about it, I simply wished it was mine. It became a poster car for me, albeit I never bought the poster, but I never forgot the model either.

But who needs a poster when one of your friends in later life takes the plunge and buys one? On a cold Saturday morning Ollie rolls up in his Aston Martin, and I did not know where to begin looking at the car. The exhausts were not only singing a deep V12 tune but they created pretty condensation clouds, a constantly changing piece of artwork. The first thing I asked him was “did you tell the Mrs you were popping out in the Aston for a bit?” “Hell yeah” he smiled. Every little boy turned man turned pensioner, did, does and will dream of using that line.

Ollie could not stay long, it was a flying visit, the equivalent of a first date coffee, she was everything I thought she would be and more. I couldn’t wait to see her again. I had to have a second date. She made me wait though, almost a year later Ollie and I finally found the time for the Aston and I to be reunited for our second encounter. 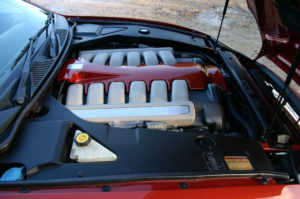 Ollie keeps his Aston Martin DB7 in time warp condition, stored and maintained correctly she is pristine aesthetically and mechanically.

On the morning of our long awaited meeting, we give the roads and the car time to warm up a little, letting the morning frost melt away. We enjoy breakfast, sat looking at the Aston parked up next to us in the courtyard, having just been woken from her Carcoon and released into the wild. Ollie and I are talking, but there is no eye contact between us, all eyes are on the Aston, Ollie’s eyes emit pride and mine lust. I am about to meet my heroin.

With some tea left in the pot, we begin to discuss the DB7 deeper, knowing that we will both want to focus our ears on the V12 music later. Ollie knows me inside out and thus reads my mind and elaborates on the DB7 dream come true himself.

“I first saw one in the early 1990s in a magazine with pictures from a motor show, but I still remember the first one I saw one in the flesh. It was parked outside the factory at  Newport Pagnell, it was a customer car as DB7s were made elsewhere, at Bloxham!” I made a mental note. DB7 not made at Newport Pagnell. Level of ignorance slightly reduced.

“Dad had booked us into a factory tour, which blew my mind. I think I bought it because of that memory. The history of Aston Martin, the effort that goes into making one, and of course, the looks and noise.” I could not wait to hear it properly.

“It’s an English car, so I keep on top of rust. You should get anything even slightly rusty looked at immediately because the first repair is the cheapest. The mechanicals are incredibly robust, and you shouldn’t ever have engine or gearbox problems. But only ever use approved coolant. Using the incorrect OAT coolant instead of IAT can cause all sorts of leaks due to the former being more acidic. I leave the air conditioning on all the time, yes it costs more fuel, as if that matters on a 6.0 V12 heh Mike?  But the cost of not using it is high if it seizes or leaks, so I rather spend a little extra with Shell.”

The roads were ready. She was pristine. I would never have forgiven myself if I had picked up so much as a stone chip. I started her up. The V12 burst into life smoothly and a couple of milliseconds later, an immaculate and consistent hum protruded from the twin tail pipes . I felt satisfied that I had created that by pressing that big red button. I confirmed that the driving position would be perfect for me. And then I made my way round to the passenger side and took my position as co-pilot ready to enjoy one of the few chauffeur rides I have ever taken, I don’t like being driven, but that trip would be worth it.

Now, upon setting off on this six mile mini trip on empty country lanes my expectations were set to fall in love with a car that would be comfortable but perhaps feel heavy in the bends, lack precision and not be too quick. I expected to deduce all of this as a passenger, from watching my friend’s driving input closely and using my free time as co-pilot to evaluate the cars reactions.

Within the first mile I saw the DB7 in her correct light. Tight, agile, planted and compliant. The word compliant rarely has the right to be involved in a sentence that contains the other three words, but in this case, it belongs. Bravo Aston Martin. Huge alloys, a low stance, great handling and ride quality, not many cars pull that off. The rear end seemed to let slip predictably and the torque of the V12 fired her out of the bends perfectly, giving the impression that the power-plant had an endless supply of energy. The brakes hauled her to a standstill with conviction and confidence. The exhaust and induction note were an aggressive yet charming call to passers by to turn their heads. The interior was a lovely place to be, build quality felt solid and the Aston had made me feel like I was at the top of my game when I sat in the driver’s seat, pretending she was mine for those precious few moments.

Newer Aston Martin’s flash up “Power, Beauty and Soul.” upon starting them. I think they should change the phrase to “Well done.” 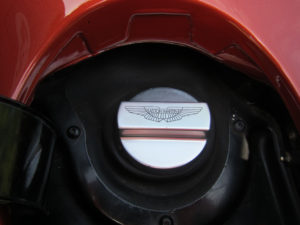 We return to base, ready to put her back in her bubble. We pop the bonnet, I wanted to see that huge V12. There is no space in the engine bay. The DB7 Vantage has an absurd amount of cylinders and fuel economy to make your eyes water. But as with most great cars, the routine is pleasure accompanied by pain, neither state of being follows or trails behind the other – they are simultaneous. But the way the Aston makes you feel is a strong enough painkiller to bring the pleasure to the forefront at all times.

The DB7 shares some Ford parts. And? Ford is great, they gave us the Model T and the legendary Cosworth models. The XK8, released soon after the DB7, looks similar. So? Aston and Jaguar were clearly ahead of their time, all manufacturers seem to emulate one another now, so by today’s standards it is the norm and accepted.

I think the DB7 Vantage is a great investment, there is no way that a package as well formed as this can stay at current prices which are hovering around the £25k-£30k mark for a decent one. And even if they do, who cares? In my eyes that is even more of an attractive buy. Investments are not always about their future perceived value, it’s how affordable they are currently and what they can provide for you on a daily basis, here and now. “DO IT.”

And if you think that is a sweeping statement above, well, I took my own advice seven years ago. I once saw a car in a petrol station in 1989 when I was seven. Best car in my world then and still is now. Stay tuned Trade Classic readers, I will reveal the car in question one day.