Alfa Romeo designed and produced the Spider in a production run spanning almost three decades. And in that time, as the last car ran off of the production line, it was to be the last rear wheel drive Alfa Romeo until the 8C launched in 2007.

This example is the 2nd series of the Spider, known as the Kamm-Tail owing to the biggest design change, its more traditional and practical rear end. The 2nd generation was produced from 1970 through to 1983.

From a power delivery perspective, all of the cars featured an in-line 4 cylinder engine, with a variety of sizes ranging from 1.3L through to 2.0L, each mated to a 5 speed manual gearbox. The US models, like this example, featured a Spica fuel injection system to meet the emission standards set out by the government.

Michael has been the owner of this Spider for over 4 years now. He bought the car as a light restoration project, having been inspired by TV shows such as Wheeler Dealers.

The search for this car was a long one for Michael. He researched the different models variants, and generations of Spiders to understand their individual nuances and landed on the Kamm-Tail as the one for him. He chose this particular car due to the recent history it came with, and importantly its overall good condition, it’s a beautiful little thing.

Circumstances for Michael have recently changed which has led him to the sale, with the prospect of becoming a father soon, in his own words were: “I’m swapping my baby for a real one!”. Michael’s including a few bits with the sale of the car like a new dash, wing mirrors and a gear lever gaiter, items that he bought with the intention to fit over time.

The Spider has been painted in green, with chrome trim and a black hood. It’s a great colour combination for this model, and the car looks really smart. Take a look at the video review and images to see for yourself.

Wheels & Tyres
Sitting on the turbine style steel wheels, wearing Goodyear Eagle tyres all around. The wheels look to be in good condition, and a professional clean would bring out the best in them. In the video you can see each wheel in detail.

Bodywork
One of the reasons that Michael bought this example, was the overall condition. From our visual inspection, we couldn’t see signs of rust or rot across the car, and it has been dry stored in Michael’s ownership. The car has a couple of chips and parking dents across it, these have been captured in the media we’ve taken; the offside front bumper and attached bodywork have a parking dent being the most noticeable.

Paint
The paint across the car looks deep and even in colour across all panels. There are no rust bubbles across the car, and although nothing in the paperwork covers a re-spray, we feel the car has benefited from one in the 90s based on its current condition. There are some stone-chips on the front side of the car that you’d expect given the mileage, but by no means do they detract from the classic styling.

Glass and Trim
The chrome trim across the car has some ageing as you would expect, wing mirrors are suffering from pitting which is why a new set are included. The glass also has some tell-tale discolouration at the bottom of the windscreen, this has been captured in the video, but otherwise the condition is good across the car.

The car is finished with black trim throughout the interior, including the hood and associated covers.

Seats and Carpets
The car features vinyl seats and trim in black. The drivers seat has tears on the bottom of the seat where it has come away from the seams. Other than this blemish the seats are in good condition. The car has vinyl door cards and plastic matting which appear good.

Dashboard
The dashboard is cracked, a typical sign of age on a car such as this. Michael is supplying a replacement dash with the sale of the car so that this can be fixed, one of things he was planning to work on himself. The crack in the dash aside, the Jeager dials look very nice, take a look at he interior video for a better view.

Steering Wheel / Gear Stick
Both the steering wheel and gear stick look in good condition. As mentioned earlier, Michael is supplying a new gaiter that can be fitted to the gear stick to further smarten the interior.

We didn’t got out on our normal run in the Spider with Michael, as he was waiting for the car to have an MOT check for peace of mind. The car has subsequently passed its MOT, and Michael has provided some videos showing the car on the road, idling when hot, and going through the gears without issue.

Engine and Gearbox
The car started from cold without issue, no smoke visible and the engine sounded as expected. The car pulls strong in the videos provided by Michael. The car goes both up and down the gears without any problems.

Suspension and Brakes
In the video that Michael has provided, we can see the car going through the local area smoothly, and no untoward knocks or rattles are audible in the video.

The Drive
Nothing visible in the media that Michael has provided to suggest any issue.

Electrics and Other
All working as expected. 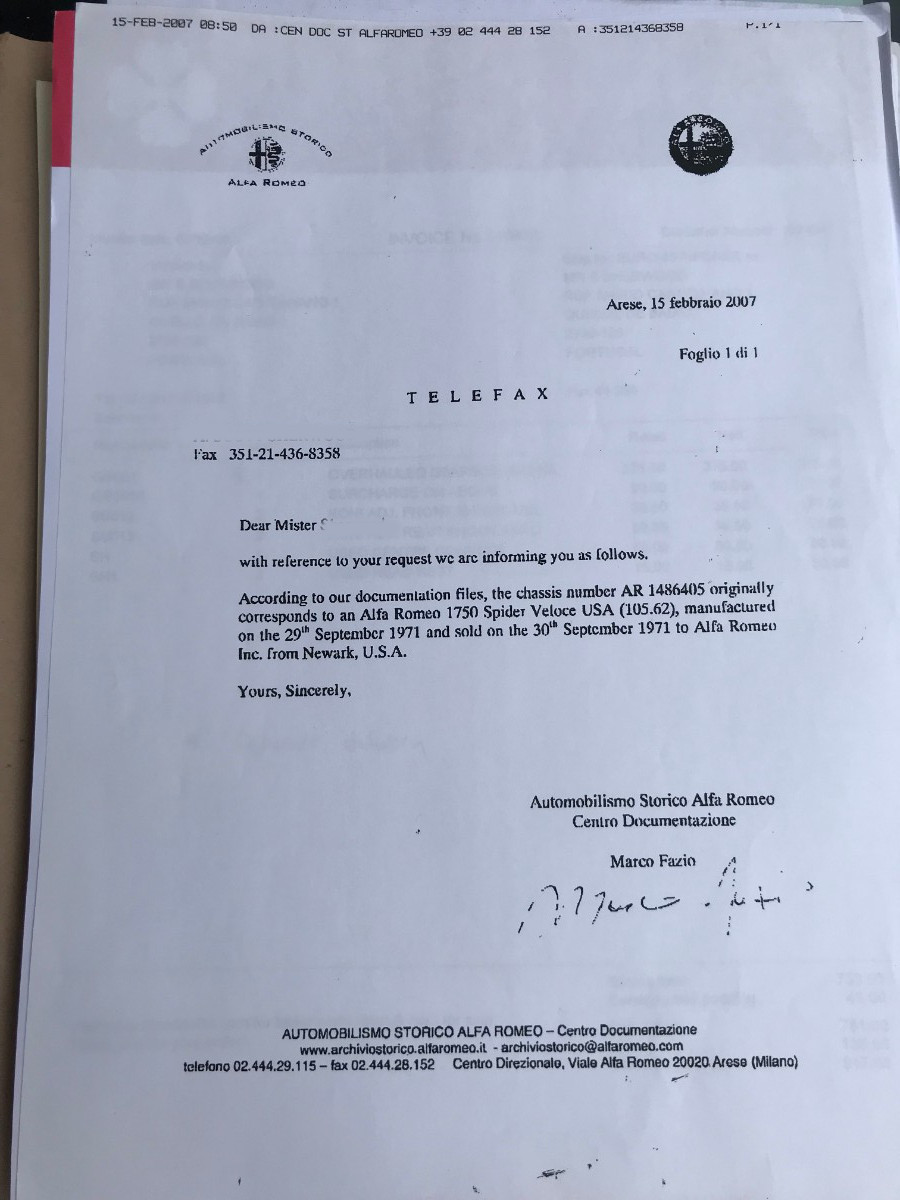 The car comes with lots of MOT’s and history from ownership and registration in the UK. It also includes paperwork from when the car was located in Portugal, as it was taken there presumably for use as a summer car by the original UK owners from 1990. The mileage appears genuine from the paperwork that is available to trace the history of the car.

The Alfa Romeo Spider is a lovely little car, it has a real presence about it and is instantly recognisable through its distinctive front end.

The twin-cam engine is a beautifully presented, as was the case with all Alfa Romeos of this era, and it adds a real feeling of an Italian exotic sports car to it.

We think this car would make a classy addition to a collection, and most importantly, now is the time to buy. I mean we are enjoying the best summer in years, it’s the summer to be cruising in a convertible and this would make for a sophisticated choice.

KULRAJ SINGH SALH
This auction listing was written by Kulraj Singh Salh from information gained from Michael, the owner of the car, and having visited and photographed the vehicle.

If you have any specific questions about the vehicle then please use the comments section below. Michael will receive a notification and will reply as soon as possible.