The design, by design house Bertone and penned by Giorgetto Guigiaro, was very forward thinking for the time with elements like the headlamps integrated into the front grill, and also followed a design principle used in other cars he had worked on in balancing the use of metal and glass.

From a mechanical perspective, the 2000 GTV featured a 2.0L version of the high revving twin-cam, all light-alloy, in-line four cylinder engine. Disc brakes all round, twin carbs and a 5 speed manual gearbox, and a limited slip differential as standard made this a very desirable car for the discerning driver. We’ve included a little review that Harry Metcalfe did on his own 2000 GTV earlier this year to help bring to life the model.

Dave inherited this car when his uncle sadly passed away around a year ago. Since then, Dave and his sister Jen have been joint custodians of their former uncles car.

His uncle owned this car from new from 1972, as can be seen in the registration document. His uncle used and maintained the car up until his later years in life, as can be seen when you look at the MOT history available online. Being a car owned in one family effectively, there is little reason to doubt the mileage of 89,657.

Dave would probably confess that he is not a classic car enthusiast. But that doesn’t mean that he doesn’t care for the car at all, for both Dave and Jen the cars have a place in their memories from when their uncle used to use them. Due to a lack of time to use them now, Dave and Jen would like the car to go on to a new home where it will be used once again hopefully.

As the car hadn’t been used in their uncle’s later life, they spent some time and effort getting the car to a lovely standard where it can be driven away now. A light mechanical refresh, but more importantly they have had rust issues with the floor and sills remedied, a typical issue with this particular model.

Most Alfa Romeos of this era are finished in a striking red. To see a 105 series finished in white is quite something. The car looks really smart (although it was a tad dirty when we went to visit it) and the white paint finish really gives it a touch of class.

Wheels & Tyres
The car features the correct period steel wheels that came with the later 105 series. Rather than the earlier wheels which had hub caps, these wheels really look in good condition, a reflection of how the car has been looked after. The car has Bridgestone tyres all around which looked good on visual inspection.

Bodywork
We’ve included an extensive video of the exterior of the car, so that you can see the condition of the bodywork. On our visit, we noticed a small dent on the passenger side roof, but other than that the bodywork looks good. Take a look at the video to review the panel gaps and shut-lines across the car. As mentioned, Dave and Jen commissioned some work recently to rectify corrosion in the floor and sills of the car, this can be seen in the media.

Paint
The car is finished in white, and on our observation, the paint is consistent across the car. The car has a few small chips in the paint on some of the shut lines on the bonnet which you can see in the media, but overall the paint is good on this car. Take a look through the media for more detail.

Glass and Trim
All of the trim and glass on the car looks as you would expect for a car from 1972. There is some pitting in the brightwork on elements such as the handles and wing mirrors, but no severe corrosion, which leaves the car looking good, patina you might say.

This 2000 GTV is finished in a contrasting black vinyl interior, with matching black carpets. It looks right for this particular model of car, and the car features the original seats with their beautiful wooden headrest mechanisms and other wood interior strips on the dash etc.

Seats and Carpets
The seats and carpets look good on this car. Everything on the interior reflects the age of the car, there is no overt wear on carpets and seats, take a look at the media for a detailed view.

Dashboard
The dash again looks to be original to the car, some signs of age, but no sever degradation in the condition. At some point, we believe the car has had a couple of extra dials fitted as was common to monitor electrical performance, as can be seen in the media.

Steering Wheel / Gear Stick
Again, as with the rest of the car, these look to be all original, as we would expect given the car was owned by Dave’s uncle from new.

As mentioned earlier, because the car was not used much in Dave’s uncles later life, Dave and his sister Jen had the car looked over by a mechanic and a light refresh performed on anything that needed it. The car started from cold and performed without fault on the drive as can been seen in the video, take a look.

Engine and Gearbox
The engine started from cold with no smoke visible, and idled both cold and warm without issue. We’ve included a video on the road going through the gears which again the car performed without fault. These cars tend to have a slightly notchy second gear but Dave changed through without issue.

Suspension and Brakes
The car handled just as you would expect for a 105 series in a stock set-up. A very comfortable ride as a passenger, take a look at the video, and imagery showing the underside of the car.

The Drive
We went on a usual short run in the local area to see how the car pulls and performs on the road. It handled the traffic and local roads without issue, and the engine sounded smooth once it was running up to temperature.

Electrics and Other
Dave informs us that everything is working as it should do on the car, with the exception of the period radio that has been fitted. It still operates the power arial, but it doesnt actually produce any sound. Who would want to listen to music anyway when you have that beautiful revving twin-cam Alfa Romeo engine in the front!

Dave and Jen are currently looking to see if they can locate paperwork that comes with the car in their late uncles past possessions. We have included invoices from recent works undertaken on the car, and included the recorded MOT mileage available online.

As mentioned earlier, this is a one owner car effectively, and so we have little reason to doubt the authenticity of the recorded milage. The cars wear is in line with this, and hopefully Dave and Jen will be able to locate past MOTs and receipts to help verify this.

The Alfa Romeo 2000 GTV is a great classic car, I feel very luck to have managed to get one of my own only recently. Finding UK RHD cars is increasingly hard as the cars were prone to rust and rot, you just don’t tend to see many on the road these days.

Finding an example with under 100,000 miles on the clock, and one owner from new, that is a very rare opportunity indeed. We think this particular car presents itself with a very good investment opportunity over time.

We have seen prices of this model increase quite significantly in the last 2 years, and it will have been helped by the recent revival of the Alfa Romeo brand. If this car was in blue, I would be buying it myself for sure. The car is ready for the next lucky owner to drive away on the day, and enjoy for many years to come.

KULRAJ SINGH SALH
This auction listing was written by Kulraj Singh Salh from information gained from Dave the owner, and having visited and photographed the vehicle.

If you have any specific questions about the vehicle then please use the comments section below. Dave will receive a notification and will reply as soon as he can.

Any evidence of how the sils were repaired?

Hi Constantine, you’ll see receipts for this work have been uploaded to the listing. 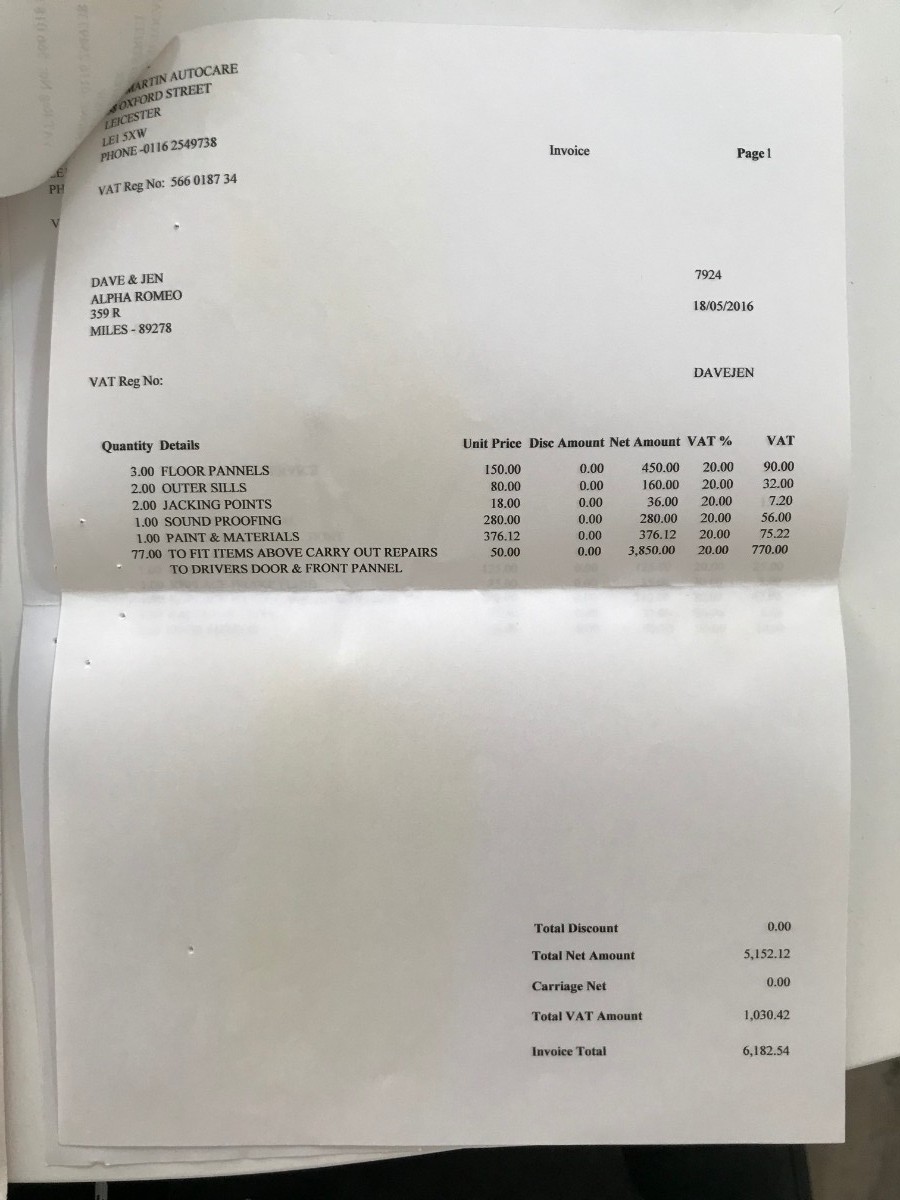 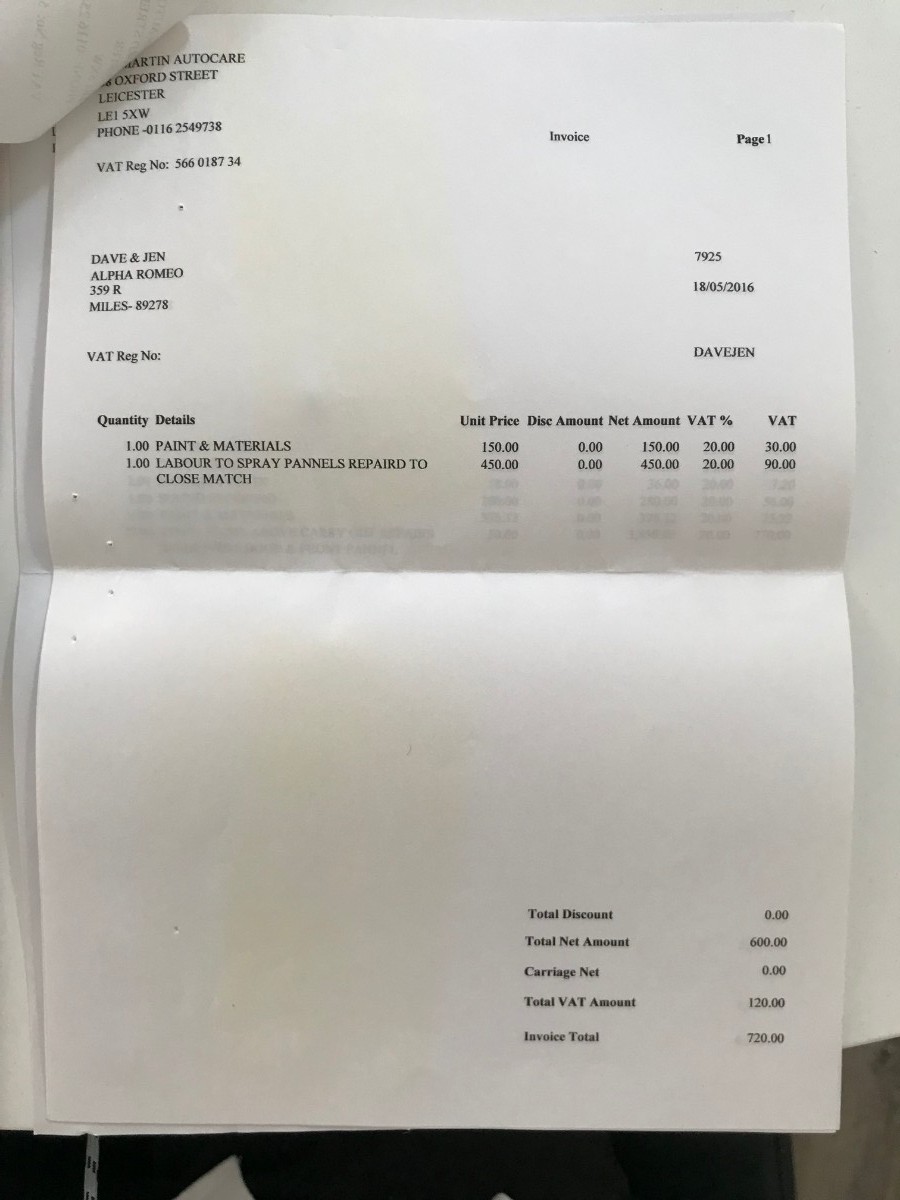 Please feel free to give us a call if you have any further questions.

Auction now live, with a very low reserve for this car.