RS, Rallye Sport, is Ford’s motorsport division and is synonymous with racing and dominated the rally scene in the 70’s and 80’s with the early Ford Escorts.

This Escort RS Turbo is the fourth generation road-going version that was in production from 1986 to 1991, and for the first time available in more colours than just white!

This RS Turbo is the second series, commonly referred to as the face lift version that was launched in 1986.

Performance was very similar to the earlier series one car, the 1597cc engine together with the turbocharger propels the car from 0-60 in just 8.2 sec and with a top speed of 125mph; the only changes to the engine being a water-cooled Garrett turbo, longer gearing, revised cylinder head and new piston, plus improvements to the Jetronic unit and intercooler.

Autocar reviewed the car at the launch in 1986 and said Ford had succeeded in building a quick, practical hatch: “this is a slightly more civilised hot hatch, better adapted to fast, long-distance motoring in improved comfort than its predecessor”.

Roy Pinhey is a big RS fan and has owned several examples of the fourth generation in the past; he knows what to look out for as he’s learned by poor examples in the past.

Roy assures us all the important areas on this car are in good order, i.e. no rust or rot in the usual places, and it’s still fitted with the original gearbox as it was common practice to change them, rather than rebuilding.

During our visit we met Des, Roy’s father, as Roy had work commitments.  However, Des knows the car inside out as he’s a retired mechanic and has helped Roy with a lot of the mechanical work over the last three years of ownership.

This car is a real eye-catcher and looked great in the spring sunshine as we took the pictures and videos.  It’s a good time to buy a car like this and is ready for use and will really stand its ground at shows, and in my opinion could easily be entered into competitions.

The car is based near Plymouth, so will be quite a trek for most of us, however, the thoroughness of our description, over 400 images and videos will give you confidence in the car, without feeling the need to visit.

Of course the mileage is slightly higher, however, it does average out at just over 7k a year and has been very well maintained including important items like cambelts, camshaft and clutch.  The car is supported by an impressive history file with receipts and previous MOTs.

The car has had professional glass-out respray in the past and looks exceptionally good.  The car is in excellent presentable condition with no visible signs of rust.

Wheels & Tyres
The car is fitted with its original seven spoke alloy wheels.  All wheels and tyres are in good condition as highlighted in the media pack.

Bodywork
All panels are free from parking dents and the shut-lines across the entire car look visibly correct and all doors close evenly.  The usual rust areas (rear boot and wings) all look in good solid order – please see the images and videos to see for yourselves.

Paint
As mentioned, the paint is in very good visible condition.  We checked under the window glass rubbers and could see no sign of masking, this would suggest the glass was removed prior to respray.  We didn’t see any colour differences in any panels in direct sunlight.  We took paint depth readings that you can see in the media pack.  The only paint defects we noticed was a very slight microscopic paint blister in the front centre of the bonnet, the size of a 10 pence piece.  Also the leading edge of the rear boot shows signs of white primer spray, as shown in the images.

Glass and Trim
Glass and trim are all in good order and etched with the registration.  The front screen has been replaced (receipt in file) and of course doesn’t have the etching.

The interior is in very good condition with original seats and carpets.

Seats and Carpets
The seats are in good condition with wear in line with expectations.  The tautness of the cloth in the centre of the seat is weaker and to be expected.

Dashboard
The dashboard is in original condition with some surface scratching on the glovebox cover.  Also there is one button missing on the speedometer surround (bottom left).  The radio has been changed and Roy has fitted a turbo and volt gauge.  The new owner could remove these gauges easily if required, and fit the blanking plate.

Steering Wheel / Gear Stick
Both are original and in good condition as highlighted in our media pack.

We accompanied Des on a short drive near where the car is dry stored and observed no issues, with the exception of some light rattling around the parcel shelf.

Engine and Gearbox
The engine is factory standard, other than a Cosworth -31 actuator which gives wastegate adjustability to allow tuners to vary boost levels and filter. A full stainless steel exhaust has been fitted too.

The car started first go from cold (see video) and reversed out of the garage with no issues.  There was no rough running and the engine sounded smooth as it should.

Roy and Des have complete a lot of preventative maintenance on the engine including fitting a new camshaft, lifters, cambelt, injectors, fuel pump, radiator and alternator.  Des has also removed the gearbox in the past and replaced the bearings. The clutch was a Borg & Beck replacement in standard specification, so not a stage 1 / 2 or paddle / puck upgrade, that makes the car difficult to drive at slow speed. Des has also fitted a Mk5 clutch pedal assembly, as that allows adjustment where as the Mk4 pedal is fixed position.

Suspension and Brakes
We observed no issues in this area and the car drove straight and stopped straight too.  Des drove the car up to about 60 mph and performed well. Roy and Des report no issues with these components and have spent money on a set of new and slightly lower springs; the original springs are included in the sale. New front brake calipers, front vented discs & pads, rear brake cylinders & shoes and brake master cylinder have all been replaced too.

The Drive
No issues were found on the drive and Des assures us there are no known issues with anything mechanical.  The turbo gauge showed boost pressure when accelerating and we could hear the audible sound of the turbo.

Electrics and Other
Electrical items worked as expected.  We tested both electric front windows and they worked, however, they were both a little slow on the up operation. 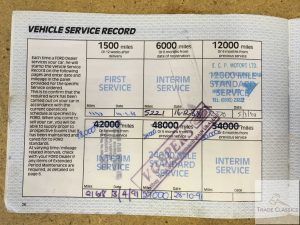 This car is showing just over 146k miles.  Although we can’t guarantee the mileage, we can say the history file supports this claim.

We have checked the VIN number against the V5 and it matches.  We weren’t able to check the engine and gearbox number on our visit, however, Roy assures us both are original, as confirmed by the previous owner.

Outstanding Finance:
– We have no record of this registration having outstanding finance.

Colour changes:
– We have no record of this registration having a colour change.

Plate Transfer:
– We have no record of this registration being involved in a plate transfer.

Scrapped Exported / Imported:
– We have no record of this registration being scrapped, exported or imported.

Stolen or Destroyed:
– We have no record of this registration being stolen or destroyed.

Insurance Write-off:
– We have no record of this registration being written off.

So we all know Fast Fords have seen a massive rise in recent months and are out performing the market.  We sold a 1996 Escort RS Cosworth three weeks ago for £45,580.

In my opinion, the series two is an incredible bargain right now, as it’s in the middle of the more desirable series one (circa £30k) and Mk5 RS Cosworth (circa £50k).  Good examples of the series two are around the £16k mark.

This car can definitely stand up and hold its own amongst the lower mileage £16k examples.  However, the additional mileage will mean the new buyer can enter the Fast Ford market at around half that price, safe in the knowledge the car is mechanically sound and feel proud to show it at regional events.  Remember to keep the price to yourself!

What’s not to love about that; this is a ‘proper’ bargain of a car to get a serious ‘modern classic’ at below entry level money.

One bit of advice, don’t lose this car; they don’t come up like this every day.

ADAM PURRIER
This auction listing was written by Adam from information gained from Roy (owner and seller of the vehicle) and Des (Roy’s father) and having visited and photographed the vehicle.

If you have any specific questions about the vehicle then please use the comments section below. Roy will receive a notification and will reply as soon as he can.

Update: Classic Car Auctions (CCA) sold a S2 at the weekend for just over £17k. Main difference compared to this example was the mileage as it’s just done 32k (if correct). Makes this car look cracking value and the market is definitely rising for these S2 examples now.

Just spoken to Des and he’s confirmed the engine number does match the paperwork (he managed to find it and check it). So it’s the original engine. He also said the car has LSD and the original turbo gearbox.

i have you a pic of battery tray please

I don’t to hand but can confirm it is perfect (this is my 3rd RS so I know how bad they usually are!)

Hi Julien… Roy has kindly taken a pic for you… We’ve uploaded it and it’s the last image in the file. Cheers.

Here to answer any questions you may have