Trade Classics > Auctions > Porsche > 1959 Porsche 356 B
Report this auction
You need to be logged in to report.
SOLD

The 356 is a lightweight and nimble-handling, rear-engine, rear-wheel drive, two-door available both in hardtop coupé and open configurations. Engineering innovations continued during the years of manufacture, contributing to its motorsport success and popularity. Production started in 1948 at Gmünd, Austria, where approximately 50 cars were built. In 1950 the factory relocated to Zuffenhausen, Germany, and general production of the 356 continued until April 1965, well after the replacement model 911 made its autumn 1963 debut. Of the 76,000 originally produced, approximately half survive.

In late 1959 significant styling and technical refinements gave rise to the 356 B (a T5 body type). The mid-1962 356 B model was changed to the T6 body type (twin engine lid grilles, an external fuel filler in the right front wing/fender and a larger rear window in the coupé). The Porsche factory did not call attention to these quite visible changes with a different model designation. However, when the T6 got disc brakes, with no other visible alterations, they called it the model C, or the SC when it had the optional extra powerful engine.

This Porsche belongs to a friend of us here at Trade Classics, his name is Gary Turner and he’s a proper car guy. Gary has owned and enjoyed many cars over the years, including some very beautiful and rare 911’s.

Last year Gary and his wife made a decision to sell up in the UK and move to Canada for work opportunities. They sold everything from their house to his entire car collection including Porsche 911’s, Porsche 912, Honda NSX, Datsun 250Z and various others.

It wasn’t long until Gary scratched his itch for more cars in Canada, he has since bought a beautiful and early VW campervan, Porsche 911 ST, concours MGA amongst others. Gary has decided to import this car to the UK, and we are delighted to be handling the sale.

The car is dry stored in a garage near Daventry – the garage has been looking after and managing the car on Gary’s behalf, and will be available for viewings at their premises.

As with the other classic Porsches we are selling on Gary’s behalf, this one has undergone a recent restoration in the US before it was imported to the UK.

Wheels & Tyres
Refurbished and wearing Nankang tyres, the wheels look great. We didn’t observe any defects, and the chrome on the hubcaps has a mirror finish.

Bodywork
Having been restored, the bodywork is in really good condition, being rust and rot free. We didn’t observe any dents in the panels, please take a look at the extensive exterior review video.

Paint
Finished in the original colour of Aetna Blue, the finish of the paint is deep, even and looks great. Very of the time. There are a couple of blemishes on the paint that have been pointed out, these occurred during transportation and storage but have now been remedied.

Glass and Trim
Glass and trim throughout look good, the trim has naturally been replaced with the restoration work, and you can see this in the photos and video reviews available.

The car has also been restored inside, albeit in a non-original colour combination of red leather and black carpets. It looks great and the cabin feels very special to sit in.

Seats and Carpets
Finished in dark red leather, the seats are immaculate. The cabin has also been reupholstered in black carpet, so the whole interior feels very fresh. Take a look at the interior review video to see the quality of the work.

Dashboard
All the dials and gauges work as they should, and there are no marks or defects to be observed on the dashboard.

Steering Wheel / Gear Stick
Both look to have been restored and look great in the refreshed cabin. The steering wheel particularly really sets off the cabin with the thin grip that was common in the 60s.

As with the body and interior, much of the mechanical elements of the car have been overhauled too. The car has the correct engine block, although it is not a matching numbers car.

Engine and Gearbox
Both the engine and gearbox are correct for this car, but they are not matching numbers with the certificate of authenticity. The engine pulls strong and the car goes through the gears without issue. As this is an early car, it has a 6v dynamo and so starting sometimes requires a bit of timing on the gas to spring the car to life, at which point it ticks over nicely.

Suspension and Brakes
The car has had a major overhaul on the suspension, as can be seen in the photographs.

The Drive
We could only take the car on a short drive, as it is not registered in the UK yet. On a quick lap of the business park, we went through all the gears and the car pulled along without issue.

Electrics and Other
The dynamo has recently been refurbished, and other electrics are also being tested. 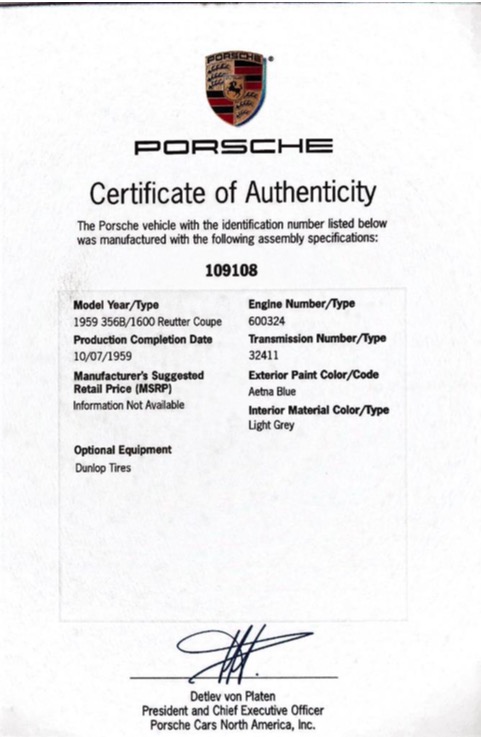 All the paperwork that comes with the car has been scanned and is included in the images below. If you have any queries on the invoices then please drop a note in the comments field below and Gary will get back to you with an answer.

HPi Check Results
– N/A – The car has not been registered in the UK and as such the new owner will be the first owner.  It is a simple process to register the car and we will help you through this.

The Porsche 356 is an important car in history. Without it, Porsche wouldn’t be what they are today, we wouldn’t have 911’s, rear-engined rear-wheeled cars probably still wouldn’t be in production.

This example has had a lovely restoration completed, which mean it’s ready to be cherished and importantly driven from the get go. The colour combination is sublime, and the car is a real head turner. Whilst I was consigning the car at least four groups of people came to admire its beauty, you just don’t see them on the road in the UK.

This 356 B is ready to be registered in the UK, and to begin its new life. If you’ve read a bit about us, then you will know that we love to drive our classics, and I hope that this car will be lucky enough to go to a new owner who will do the same.

KULRAJ SINGH SALH
This auction listing was written by Kulraj Singh Salh from information gained from Gary, the owner of the car, and having visited and photographed the vehicle.

If you have any specific questions about the vehicle then please use the comments section below. Gary will receive a notification and will reply as soon as he can.