Steve has brought this car back to life, after it had sat unused in a field for many years, find out more below.

Launched in 1970, and built up until 1981, the original Range Rover (subsequently dubbed the Range Rover Classic) was “A Car For All Reasons”. Rover had been convinced that there was a market for a more luxurious version of their Land Rover, and with the Range Rover they hit the nail on the head.

A towing capacity of 3.5 tons, top speed over 100 mph, a large cabin for 5, hydraulic disc brakes on all wheels, and importantly the four speed, dual range, four wheel drive gearbox.

The car was powered by a lightweight alloy V8, originally designed by General Motors, and modified for use in an off-road environment; carburettors to enable the engine to stay fuelled at extreme angles, and enabling the engine to be started through an external crank if required.

From a design perspective, the body was actually mainly designed by the engineering team. During the development, they produced their own body panels from aluminium to protect the occupants during testing. The functional design was then only modified in small details by the design team led by David Bache.

Steve has owned this car for just under 2 years now, and over that time has brought the car back to the lovely original condition it now stands. The restoration he commissioned is comprehensive, you’ll see in the paperwork section where he’s listed out all the important work that was completed.

Steve’s known the car since 1997, when his close friend Alan originally purchased it. At the time it was his friends pride and joy, and Steve remembers how nice it was when he first got a chance to travel with Alan in it. Subsequently, Alan purchased a P38 Range Rover, and the Range Rover Classic then took the back seat, or rather, a permanent place in a field! The car then sat in said field for over 10 years, until Steve came to the rescue.

Covered in green mould, and a family of mice to boot, the car has since been respectfully restored to original condition. Luckily for Steve, and the new owner, the chassis has stood the test of time, and naturally the outdoors had little impact on the rest of the body with it being aluminium.

Now that the restoration has been completed, Steve has used the car on a few high-days, but is looking for the car to move on to a new home so that he can fund a new project he is working on.

Finished in the classic colour of “Sandglow”, the car has had a light restoration across the paintwork to bring it back to life. It certainly is an eye-catching car, attracting smiles and questions from passers by on our short drive. The chassis needed no work in terms of restoration, and to help maintain it for many years to come, Steve commissioned it to be treated with wax-oil again.

Wheels & Tyres
Steel wheels all round, and sitting on new 16″ Avon Ranger tyres all round. The earlier models featured the simpler wheel design, and although they are indeed very simple with no branding on them, they look great against the rest of the car. This is because they have been restored having been shot-blasted and re-coated. Take a look at the images for an idea on condition.

Bodywork
With the majority of the car constructed from aluminium body panels, the car has not suffered like most classics would do if left in a field. The shut lines across the car looked good, take a look at the video and images to see the car from different angles. The drivers side door was not closing properly, Steve is having this remedied. One of the only panels in the car that is made from steel is the rear tailgate. Naturally this was rusting when Steve acquired the car, but was restored as can be seen in the media.

Paint
The Sandglow paint looks great across the body of the car. It is a real stunner, and such a great period colour. The same colour in fact used by the Camel Trophy cars up until 1997. The car has been repainted across all the body panels, except the roof. Steve chose to leave this as is, so that you can see some originality of the car. The paint looks even, deep, and really sets off the design of the car. You’ll notice on some of the images, there is some cracking in the paint on the rear tailgate that Steve is having repaired before sale.

Glass and Trim
The glass and trim across the entire car are almost all original and look good. Importantly for originality, you’ll see the “Triplex” logos across almost all windows of the car. The only exception is the rear tailgate window. This was replaced after some thieves attempted to steal the car when the car was lying dormant in a field. When the window was replaced, part of the frame on the bottom was damaged too and subsequently replaced with steel that is showing some rust spots. The window seals across the car have been restored rather than replaced. The mould removed and the colour brought back to black. They show some signs of cracking on the edges, but by no means detract from the visual appearance of the car. Take a look at the media to see for yourself.

You don’t get much more classic and period correct than matching carpets and velour upholstery. Steve has brought the interior of the car back up to an original standard as part of the restoration too, and the cabin is a great place to be, the seats having been re-sprung were luxury indeed.

Seats and Carpets
New carpets have been fitted in the entirety of the cabin, and they look great along with the velour seats. The seat fabric has been restored rather than replaced, and it’s been done to a great standard and looks lovely. You’ll see from the media that the drivers seat has a small section where the seam has come away, this can be re-sewn. The cabin has also been fitted with a new headlining, and the interior lights also replaced and working correctly.

Dashboard
The dash looks in good condition throughout. Steve has replaced some elements of the controls on the steering column as necessary, these have been detailed in the paperwork section where he has written up the work completed. The plastic outer binnacle on the dials is loose as observed in the media. This is because Steve hasn’t glued it down, being loose due to the damage caused by an attempted theft of the car many years ago.

Steering Wheel / Gear Stick
All looking great. Importantly, the steering wheel has been correctly recovered in leather as part of the interior restoration.

Ensuring the car was mechanically strong is where Steve focused much of the attention of the restoration, and this showed when we started the car from cold and went on a short drive through the local area. When reviewing the exterior video, pay particular attention to the underside where you can see the elements that have been restored/replaced. The car has an MOT until August 2019.

Engine and Gearbox
The car started from cold without issue as can be observed in the video. The engine didn’t need any rebuild work as part of the restoration, and the V8 sounded great burbling away on our drive. The carburettors were rebuilt, new fuel pump, starter motor, and an electric ignition system being fitted to ensure easy starting on those cold mornings. On our trip, Steve put the car in all 4 gears without issue, you’ll see the long-throw gear stick go in to all the gears in the video of our drive.

Suspension and Brakes
As part of the mechanical restoration, an important overhaul of the suspension and brakes has been completed; new dampers, bushes, springs, brake lines, calipers, pads, discs, wheel bearings… It’s no wonder when you look at the work completed by Automotive Solutions, why the car drove so nicely around the local bumpy roads. No knocking/rattling/squeaking observed on our run through the local area.

The Drive
Very enjoyable. I’ve admired these cars for some time, and taking a trip in one has solidified its place as a car that personally I would like to own one day. This car pulled us along the roads with ease, the V8 burbling away smoothly.

Electrics and Other
The car has had a few items replaced where needed, such as interior lights and exterior lights. Steve informs us that everything is working as it should. 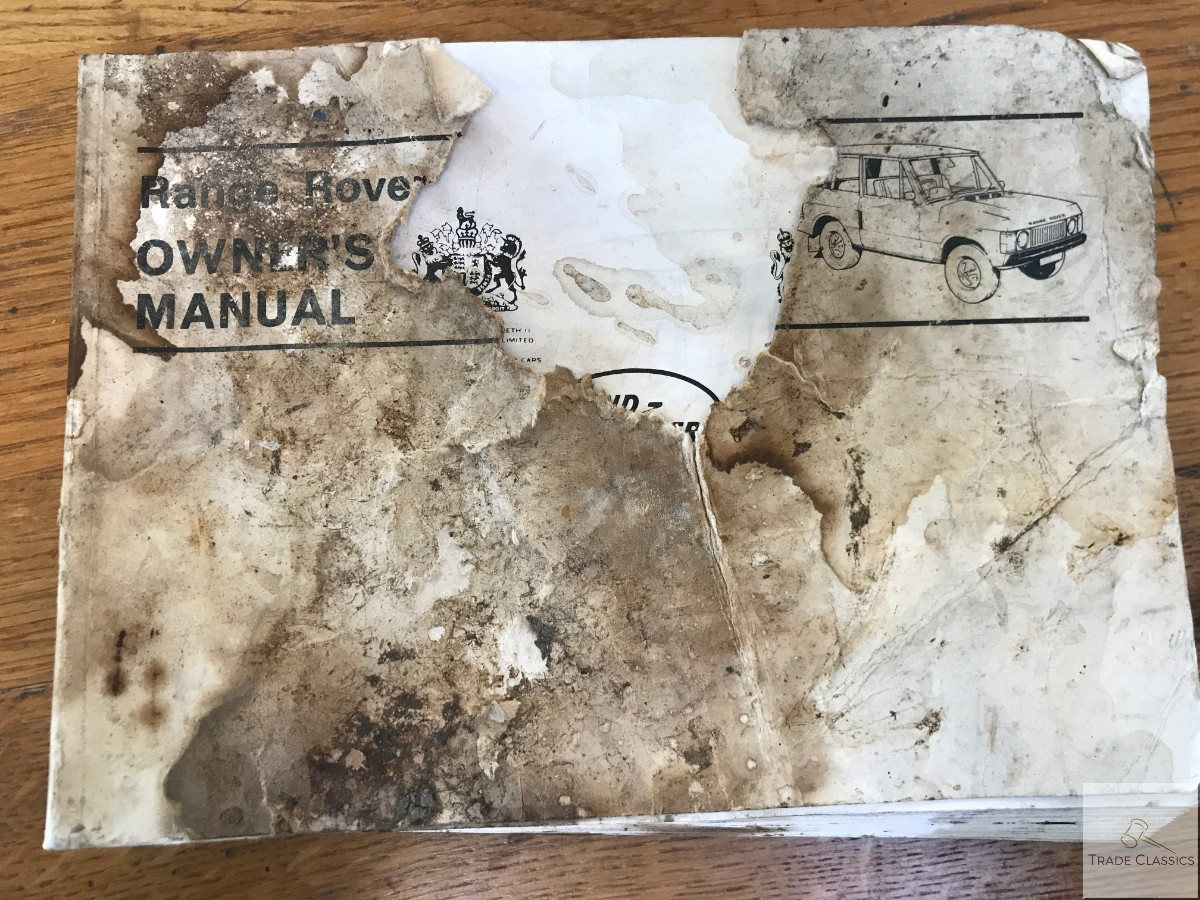 Steve’s owned the car for the last 2 years, bringing it back to life after it spent much of the last 15 years sitting idle in a field. Importantly, he’s known the car since 1997 when his friend Alan purchased the car, and so has strong confidence in the reported mileage.

The original Range Rover; “A Car For All Reasons”, and why the hell not when it is as good looking as this one. As mentioned, the Range Rover Classic has been a car I have long admired, and the 2 door version is definitely the one to have.

The body panel construction of almost all aluminium mean that these cars benefit from not rotting away, although the chassis can do. This car has a solid chassis, and all of the key mechanical elements have been overhauled along with a restoration on the exterior and interior focusing on maintaining the originality of the car.

It’s a real head turner, and the next owner will definitely be able to enjoy the car from the get go. Get in touch to discuss the car in further detail with us.

KULRAJ SINGH SALH
This listing was written by Kulraj Singh Salh from information gained from Steve the owner, and having visited and photographed the vehicle.

If you have any specific questions about the vehicle then please use the comments section below. Steve will receive a notification and will reply as soon as he can.