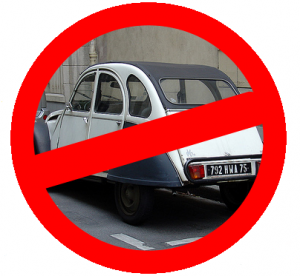 Some things go together: like wine and cheese; bœuf and bourguignon and Paris and classic cars.

But not for much longer, perhaps…

The mayor of Paris, Bertand Delanoë plans to ban cars aged 17 years or over from the Parisian streets.

The reason for these proposals is to rid the city of vehicles seen to pollute, both in terms of emissions and noise.  Therefore, the ban will not only concern cars; but also lorries and buses aged 18 years or over and motorbikes made before 2004.

The ban will cover the Paris area inside the A86 motorway ring road and is proposed to be introduced in September 2014.  Drivers failing to conform to the ban would expect to see fines of around €100 (which equates to about £80 at the time of writing this blog – December 2012).

Given that the Parisian mayor is a socialist, his proposals have been quite heavily criticised.  A ban on older cars has been seen as a policy against the less-wealthy members of Parisian society.  Such a policy would therefore not be ordinarily expected by a socialist mayor.  In fact, his plans are even more controversial given the current economic times.  Those with older cars would be forced into buying a newer replacement vehicle, or would not able to drive at all in Paris.

It is not as if there would be many car buyers looking to purchase older cars, that they would not be able to drive!

Political opposers have slammed the plans as anti-social, anti-suburban and anti-motorist.  However, this mayor seems set on green measures.

His plans also include toll barriers on motorways for lorries, and eco-taxes for heavy vehicles using the Paris inner ring road.  Speed limits are also set to be reduced.  The overall goal is to lower emission levels in Paris by 30% before 2015.

In fact, the French see air pollution as a serious health issue.  Air pollution is responsible for taking 6 months off the average Parisian life, compared to those living elsewhere in France.

Taking steps to deal with vehicle emissions is billed as a step towards tackling air pollution.

These proposals are likely to be supported by some more “social” ideas to soften the blow.  It”s possible that there may be the introduction of state pay-outs, to help those who need to replace their old cars with new conforming cars.

For the moment, the ban is just a proposal and has not yet been voted as a law.  The idea alone is almost unimaginable to many Parisians, and visitors to the city.

It”s quite sad to think of Paris without the vision of old French classic cars like Citroen 2CVs or Peugeot 205s driving along the banks of the Seine.

However, this vision like a Robert Doisneau photo, may soon be a definite thing of the past, as Paris may be set to say bonne nuit to old and classic cars.