Login Details
Trade Classics > 1960s Classic Cars > The original Ford Mustang is one car that just loves to show off!

The original Ford Mustang is one car that just loves to show off!

Not the state of being I experienced after Christmas just gone by, but the the film, in which Bradley Cooper and co embark on, endure and survive an epic lads weekend in Vegas. There is a scene in the film that is the epitome of the ultimate road trip. The chaps are motoring along in a 1975 Mercedes 220SE drop top in the sun, sitting amongst friends heading towards the bright lights, the chosen car adding a substantial dose of magic to the experience.

I relived that scene one winter to a certain degree. With a pony logo on the steering wheel in front of me, roof down, three good pals crammed in, pretending not to be cold, we cruised down to Lakeside shopping centre, down the A13 in East London. 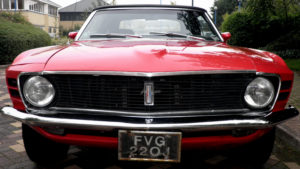 Actually, it was glamorous. London by night. A red 1970 Ford Mustang convertible. The first time any of the occupants had been in a classic Mustang. It was cold, but dry, so the roof stayed firmly down, we wanted to see the sights and be seen.

And seen we were. If there is any car that can pull a crowd, produce thumbs up like a Japanese assembly line knocks out electronics, one after the other non-stop, it is a classic Mustang. A friend of mine summed the Mustang up perfectly – “Mike, it doesn’t matter where you go, a Mustang is cool everywhere. Whether you are a seventy year old, thirty-five year old or an eight year old, man or woman, it’s a cool car, nobody dislikes a Mustang.”

And in eight years I’ve never had a shred of evidence to pick even the tiniest of holes in his statement. And I’ve driven many Mustangs. But this was in fact my first time behind the wheel of a mighty ‘Stang. My task was to road test the car, suspension and electrical work had been carried out and he needed to be put through his paces to reveal any issues. He needed to have a couple of occupants too, to properly test the suspension. What a tough life.

On the way to collect my friends, none of whom were petrol heads, I digested the fact they didn’t really understand how exciting it was that we were going for a drive, for the sake of it, in a bright red Mustang. But I knew they would get it when they laid eyes on us.

I decided to fill up before meeting them. The Mustang was slick, an extrovert yet elegant…sort of how I like to try and behave myself…so it was best for me and him to hit the petrol station together with nobody cramping our style. It was sort of like hanging out with an older pal when you are in your teens, you let your more experienced friend lead, and you follow, upping your game by default.

The Mustang lead. I followed. I had more game now.

Putting fuel in him is still a fond memory. The solid, intricately styled metal fuel cap between the rear lights is a beautiful creation. Satisfying to turn and open, pleasing to close. And that process in the middle known as refuelling…words fail me. I felt on top of the world as fellow re-fuellers watched in awe.

“Bet that drinks don’t it?”

“Can I take a quick picture?”

“How long you had it mate?”

I could fill this entire website with comments that came our way. The Mustang even made me believe it would be possible to attract the attention of the female species out on the road, never mind a nightclub or bar, the super cool ‘Stang might just have been capable…but his wing man for the night was useless. I was no Bradley Cooper.

The Ford Mustang was a handsome and accomplished old boy who had aged gracefully, hiding his now approaching senior status extremely well. A compliant ride, comfortable driving position, press and go controls all garnished with roof down action at its best, with a mesmerising exhaust note for good measure. I loved hearing each cylinder fire, he produced a lazy burble, which made him more purposeful. He spoke slowly, making sure he was heard…his words were not rushed, they didn’t need to be, he knew the speech he was emitting would be loved by all. I would help him change the pitch and tone with my right foot. I too felt purposeful as I did so. 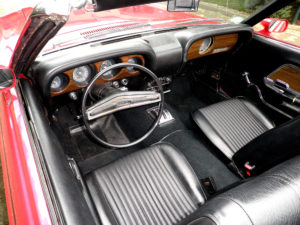 He showed me that those scenes in American movies where drivers are moving their arms rigorously to keep a car in a straight line are true to a certain degree. The steering did indeed have a lot of play and was vague. Cornering? I did so slowly and with caution, this action was vague and full of play too. Rattles and squeaks emerged consistently from brittle plastics and basic manufacturing techniques. Pace? Not really. Make it up under braking? No way. I was braking early.

Did it matter? I want to use the phrase “did it f…” but I’ll just say no, it didn’t. Driving along in the Mustang with Chris Rea’s Road to Hell up as loud as possible is a scene in my life I will cherish beyond my living years.

The Mustang had much charm and was so wonderful and uplifting to spend time with that he actually made those traits cool. It was his character. Generally in life, if someone or something looks and feels oh so good, you forgive flaws, inconsistencies and difficult behaviour. The Mustang is a shining example of this. Even the heads that lacked petrol in the form of my friends loved the Mustang and to this day still speak of him. Our one regret was that the event was just before camera phones became “so camera” and thus we do not have a picture between us. But a life long memory remains.

So do the Mustang’s brothers and sisters all over the world up to five years older or so make for a easy classic car to own?

Yes. For sure. Buy a good example that is as rust free as possible and you will find maintaining, driving and sourcing parts for a Mustang easier and cheaper than you may think. It is such a widely followed car and thus there is a huge collection of knowledge and know how out there, and being quite a basic car engineering wise, your local friendly garage will be just fine looking after it. In fact, I can guarantee they will look forward to your Ford Mustang coming in…a Mustang always sprinkles magic on the surroundings and lifts spirits.

Now I could say when you buy one, update the suspension and bushes, fit electronic ignition, upgrade the braking and fuelling system and so forth, taking advantage of all the uprated gear available out there…

I say buy one, fit a cracking stereo, and go pick your mates up!