Is the Lada Niva the Best 4×4 ever made?

Dreaming of a white Christmas?

Perhaps you love building snowmen, chucking snowballs like a six year old, or perhaps are six; and the festive holidays are all the more special when they look like the Christmas cards!

Or you want an excuse to buy a 4×4, just in case it snows. For an hour. Casting aside the mighty Range Rover and the ever school-run-present Bmw X5, there is one indestructible and unstoppable four wheel propelled motor that stems from the lands where snow falls for weeks and months to a level unimaginable to folks living in mild climates like the UK… Stop moaning, it will be summer soon! Kind of…

The Lada Niva. A star player in communist regimes, outliving the death of that communist regime itself, it really is a special vehicle that is good old fashioned solid and rugged.

Taking a Defenders simplicity to another level, their designers literally called it a “Renault 5 on a Land Rover Chassis”, the Niva has not changed much over the last forty years. Made for agriculture by the now non existent Soviet manufacturer AvtoVAZ, “Niva” actually means “field” in Russian. They wanted it to go everywhere. And it does.

This 4×4 will go places others of the time wouldn’t dare go, with thanks to a unibody resulting in more refined handling and lower weight. That is not to mention it had three differentials, an independant suspension at the front paired with coil springs at the rear, somewhat of a mystery to off-road manufacturers at the time.

I got up and close to one in Bulgaria recently; the Police who use them could not fathom my excitement for their trusty rusty rugged Lada and were in shock when I asked for a photo. This one in fact. 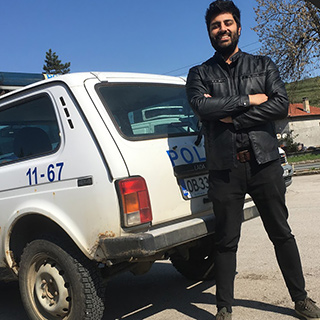 The older models enjoyed a petrol heart ranging from 1.6 to 1.8, with a 1.9 oil burner introduced for the later models from 1999, which was pretty much the same car but with added bits of plastic trim, modern mirrors and slightly tidier lines.

The original Lada Niva, in white, with “Police” written on the side is what I want. Then I’ll go out and do this:

I wonder that if you rip that AvtoVAZ badge off and stick a ‘Western’ one in its place, would we have the best 4×4 ever made? Communist Classics will make their way onto the scene. Watch this space.