The Lamborghini Espada – the deep end of the classic car market 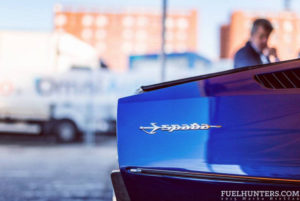 Mike talks about his first encounter with a Lamborghini Espada and how it captured his heart.

Not unusual for a Friday afternoon. But one thing stood out. The chap on the other end of the line sounded extremely calm and fulfilled, like he had achieved something grand and was now basking in the rays of what I can only describe as “I did it”.

The outcome of the call was that we would be welcoming a new car to our storage facility later that day. As I replaced the receiver back, I caught my colleague Terry looking at me with a star struck look upon his face. “Espada? Really?” Terry being two decades my senior clearly knew something I didn’t. Playstation Generation Baby that I am, what did I know? Terry became tied up on the phone before he could elaborate on his excitement. Being a professional storage outfit my number one concern was which bay the car should be stored in, and using the magic of Google images I deduced that this car was no bigger than a 1970’s Élan. Easy.

Two hours later I learnt a valuable lesson, never ever think you understand the presence a car will have just from looking at pictures. As Jack slowly maneuvered his new found love into the garage, the V12 burbling smoothly, I realised that this was not a Lotus Elan sized motor car at all, no sir, this was in the size league of a Jensen Interceptor. I am now standing mesmerised in front of a Lamborghini Espada that prior to Jack driving in with I had never even heard of. The most exciting cars to come across are those you have not. I began to pace around the car, taking in the neatly sculpted details present on every panel and could clearly see this car was special, it was a Lamborghini after all and a classic one at that. Never mind having a new Aventador with a warranty and modern electronics, this was the deep on end of classic car motoring, solely for those who dare. 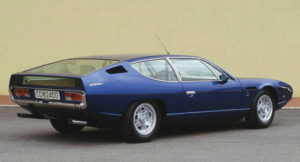 Jack began to tell us that he had always wanted one, it was his ultimate car. I felt privileged to be part of the first few scenes of Jack’s Espada ownership dream materialising, I could see it was only just sinking in for Jack himself. Jack informed us of his intention to drive the car to the South of France soon where it would roam the roads daily. What an excellent plan. He was most excited, no sign of nerves whatsoever. Nervousness and excitement often produce the same basic feelings, but when one is nervous you don’t want to be where you are, but with excitement you would not want to be anywhere else in the world but there. And Jack was firmly there, by the side of his Espada telling us his plans for a restoration, which is actually currently under way.

Car restorations are not just about the car or the physical process itself, it is the hard proof that someone has achieved what they had always lusted after. The restoration simply serves as a time warp tool to transform your dream car into the same state you remember wanting it in. Jack’s Espada looked awesome to me, I did not think it needed anything doing to it, but Jack had a different image of the car in his mind, and thus it is now being fettled to reflect ‘his dream’.

I believe we tend to pick up cars on our radar as we grow up, the point at which we have unlimited aspirations but do not necessarily understand the realities of making them happen. Visualise a graph, “aspirations” along the y-axis and “attainability” along the x-axis. As a 12 year old lad thinking that one day I would easily buy a Ferrari F40 I fall firmly on the top left of my graph with that choice, for now anyway.

But when you come across a soul who has managed to land their ‘x’ on graph position top right, it must be celebrated. I will be following Jack’s progress with the mighty Espada with much interest and be reporting back, keep an eye out folks.

Why not check out Trade Classics stock to see if your classic car dream is closer than you think?