Yes I’ve written an article on the Nissan Figaro – have I gone mad, you decide! 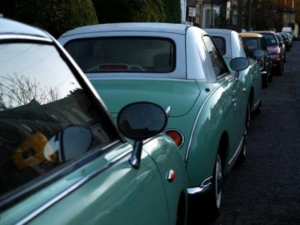 Nissan. The people that gently sprinkled the Micra upon us and landed bombshells in the form of the Skyline GTR series…. and still found time to give us the Nissan Figaro!

My first thought when I spotted this tiny little convertible, presented in pink and white, was…”if Hello Kitty was real, this is what she would be driving”. And I never ever gave the Figaro a second thought. EVER!

Until September this year when the cute and compact Nissan taught me a life lesson.

Occasionally, our stubborn opinion formed within our deeply set parameters and likings can change in an instant when someone we hold in high regard has a different outlook to the matter in question. Meet Alex Ball, a friend of mine who owns Retro and Classic Car Hire in London. 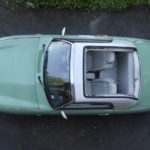 During a long awaited catch up on life gone by over a cup of tea, Alex mentioned that one of his star cars was a Figaro, so much so that he had three. I quietly sipped my tea and took another biscuit to buy time to think of what to say next. And to select the mute option on opinionated Mike’s voicebox. I couldn’t tell Alex that every time I saw a Figaro I thought of the Japanese cartoon cat Hello Kitty and that I wouldn’t be seen dead driving one, nor did I see the point of why they ever made such a car. He liked the car. And if he liked it, I had to find reason to change my tunnel vision of the Figaro.

I admitted that I did not know much about them, but I knew that they seem to come in pastel colours. Alex, gentleman that he is, gave me the low down.

Being a stylish, reliable and draught free cabriolet that is easy to drive and maintain, they promised the perfect rental car potential for his business. And rent they did, the three Figaro’s are busy, even having their own dedicated website now. All three Figaro’s are matching in green and white coachwork, creating quite an impressive sight when they are all parked together. I have dubbed this well performing trio Alex’s Angels. Tunnel vision well and truly dialled out and a new found respect for the quirky Figaro and its fabulous roof design.

The central part of the roof and rear glass window folds back into the boot leaving the sides in place producing an almost draught free open top experience. 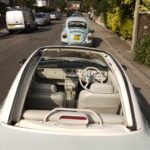 Having spotted a Figaro for the first time in 2005 along road in East London Alex knew at that moment he had to have one. And over the years Alex has accumulated much knowledge of these collectable little motor cars from his ownership. I picked up from Alex that prices vary from £2500 to the region of £11,000, very low mileage examples are rare and carry a premium, and it is vital to search for a car with a smart interior because the seats are white leather with body coloured piping. Four body colour schemes were offered, lapis grey, pale aqua, topaz mist and emerald, the colour of Alex’s Angels. Alex tells me the colours reflect the four seasons, what a fascinating twist, I love the imagination behind Nissan’s decision on that one.

Like most classic cars, regular servicing promotes reliability, bits such as bumpers can be expensive and hard to source because Nissan has stopped supplying certain parts and rear arches can rust. But breathe easy as there is a healthy supply of second hand parts and cheaper Morris Minor arches will fit. The integral cd/tape/radio player from Clarion can be refurbished and converted to UK frequencies for roughly £250, so Terry Wogan can indeed accompany you on your travels. Alex does however advise that it is best to keep a little kitty (no pun intended with Hello Kitty, promise!) for turbo failure as a repair will be costly, weighing in at around £700.

Designed for the City, a Figaro sitting at 70mph will be running at about 4300 rpm, and thus Alex says cruising at 60-65 mph is the ‘sweet spot’.

A number of original extras are now much sought after and expensive, so keep an eye out for Figaro’s sporting a parking stick, coffee cup holder, and special alloys, you could be looking at a rare gem. Alex tells me the Figaro is in fact one of four cult classics designed by the Pike Group, the Nissan special projects team, the others being the BE-1, the Pao and the S Cargo van. I shall be researching them myself, I love coming across cars that I have never heard of.

Initial production of the Figaro was 12.000 but this was upped to 20,000 as demand was so high. All were made in 1990/1991 and you had to enter a lottery if you wanted to buy one, such was the huge demand for this well timed Nissan.

So can Nissan’s Figaro make for a cool and reliable easy to maintain classic car?

I think so. But don’t take my word for it, perhaps the best way to see if you want to own something is to spend a weekend with it, like one would date before committing to a relationship. So why not make your date with a Figaro now at www.figarohire.com and check out the rest of Alex’s fleet at www.retroandclassiccarhire.co.uk/home/ for yet more motoring inspiration.

An excellent summary of our quirky little cars. But they are now 25+ years old and time is taking it’s toll, so buying one as a daily run-around really isn’t a good option. Now a Classic, they are best kept under cover and only taken out on high days and holidays. Folk do use them as everyday cars and keep them.outdoors too but the British weather and wet salt on the roads is taking it’s toll. So if you look after yours and treat it with care it can only go up in rarity and so go up in value!