Celebrating 50 years of the Porsche 911, Porsche GB have assembled a team setting out to discovering the roots of historic motorsports and taking part in races across some most prestigious tracks across Europe.

Gordon Robertson, Chief Driving Consultant for Porsche and Barry Horne, winner of the inaugural Carrera Cup in 2009 were the first to race at the legendary Brands Hatch using a 1965 Porsche 911.

Starting the season with a great run, the team were only 20 seconds from reaching a podium position, check out the video from their first race:

Throughout the season, each driver will be embarking on their own adventure with the 911.  The series also features the legendary driver Richard Attwood, who is noted for Porsche’s first win at Le Mans in 1970.

The 911 has a simple yet striking design, created by Ferdinand Alexander Porsche it still is desirable model today and the heart of the Porsche brand.  Porsche have over 30,000 racetrack wins, in which a majority has been achieved from the 911.

The car used in the series is a 1965 911, imported from the US has a rear 1,991cc flat-six boxer engine capable of 130 hp.  The car had to go through extensive testing by Porsche technical team to ensure that it was ‘FIA Approved’ ready for the competition. 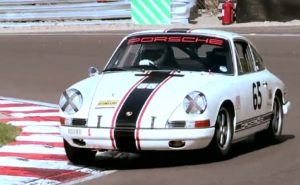 The rest of historic races 911 in the series will take part on the following dates: