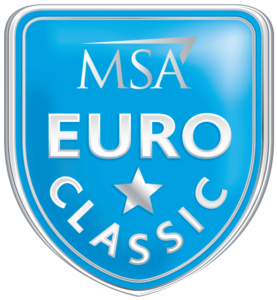 Over the years, when waiting to board a cross-channel ferry, I have enviously looked at a queue of classic cars en route to the open road of the continent, where they will be greeted by mile after mile (or should that be kilometre after kilometre) of jam-free roads, through historic towns and pretty villages – heaven.

There are a number of classic car tours which take place on the continent, and one of the more well-known is the MSA Euroclassic.

This is a hugely popular event because of both its history and excellent organisation.  It”s also a non-competitive event and takes place purely for the joy of driving classic cars along scenic European roads.  In fact, it”s a real celebration of classic car touring.

The 2012 tour is open to all four-wheel classic cars which are 20 or more years old, therefore made before 31 December 1991.  However, in the spirit of celebrating the classic car, the event has also accepted a limited number of modern classics such as a 2010 Aston Martin DBS.

This year”s event is particularly special, as it celebrates 20 years of the MSA Euroclassic.

Organised by International Motor Sports Limited (IMS), the 2012 programme has just the right balance of planned events and free time.

This year, the tour starts in León, in Spain, with an opening reception on Monday 24th September.  During the course of the week, the group will steadily make their way across Northern Spain, visiting sites such as the Grand Prix course Circuito del Jarama and some great places such as Madrid and Salamanca.

On Saturday, the tour moves into Southern France, with visits to further race circuits such as Albi and the also previous Grand Prix venues of Saint Gaudens and the Charade Circuit at Clermont-Ferrand.

The tours ends in Vichy on Tuesday 2nd October.

Throughout the trip, the tour has been carefully planned to take in as many scenic routes as possible, including hill climbs.  The route will even cross the famous Millau viaduct, which is the highest in the world.

This is probably a good time to mention that the tour has a dedicated break-down service throughout the trip!

Although the weather has generally been very good during September, unfortunately the weather forecast for this week looked more like something you”d expect to see for the Lake district rather than Spain and the South of France.  We hope that it will not dampen too many roadmaps, and that many of the cars have been able to enjoy some fine moments of open-top driving.

Now, I am really sorry if I have revved your engine regarding for this year”s tour, as it”s now too late to join.

But the MSA does have a website (www.msaclassics.co.uk), where you will soon be able to get information for the 2013 MSA Euroclassic.  And in the meantime there will also be photos from this year”s tour.

It”s also worth mentioning, that there are other European classic car tours which are planned for other times during 2013, keep an eye on my blog for future features on these.