This Porsche 911 Has Four Doors

William Dick, a Texan who distributed VWs and Porsches in a number of US states, and enjoyed driving Ferraris and Maseratis but wanted a more practical car for him and his wife. Introduce this absurd 911 sedan!

The project started in 1966 even when Porsche already made a huge impression on the world of cars. It wasn’t enough for William and had his General Manager fly all the way to Europe to find a designer willing to make it. Not bad for the GM of the time, he could call it a holiday! And also I guess you could conclude William didn’t want an American to completely redesign a German Porsche too!

Two budding coachbuilders, Dick Troutman and mechanical engineer Tom Barnes agreed to make the car. In December of 1966, an early production 911S was given to Troutman and Barnes, and they got to work. A metalsmith, Emil Diedt, went straight to removing the roof and extending the platform by 21 inches (55.3 centimetres), just before the B-Pillar. This would lead to a 108-inch (2,743mm) wheelbase. You must wonder to yourself if these guys looked at each other during production and said, ‘what on earth are we doing here’.

It would be near completion in August 1967, when two new factory Porsche options were applied. The Fuch wheels, and the Sportomatic transmission. Dick would also ask to have the car be painted green. It would be delivered to Hester Dick around December 1967. Its total cost was estimated to be around $20,000 USD ($153,530 USD in 2020). After William’s ownership, the car was painted green at some point. 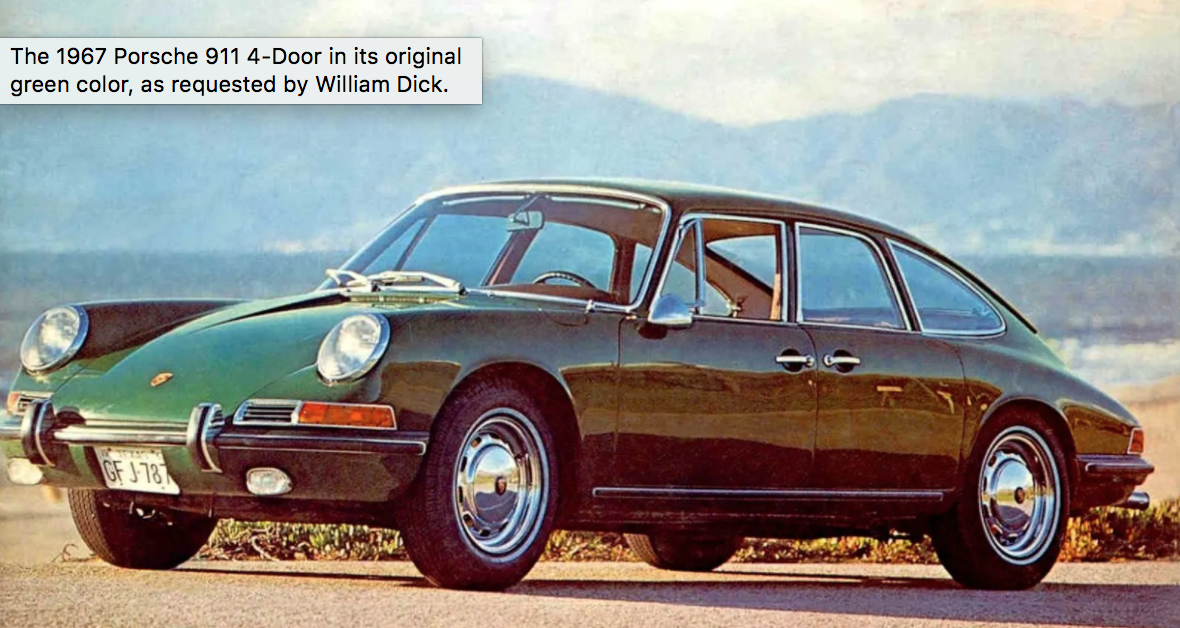 By the summer of 1968, Porsche actually had their eye on the car, debating whether to give the one-of-a-kind sports sedan a production date. Although they never decided to create it at the time, who knows, maybe William Dick’s design for his 911 ended up on the design board of the Panamera – awaiting confirmation.