The Audi Quattro is a both a road and rally car that was unveiled to the world at the 1980 Geneva Motor Show.  Production of this iconic car contiinued through to 1991 with many editions and revisions over the 11 years.

Being a 1987 model this car originally was fitted with the 2.1l 10v 5 cylinder engine (WR) that has since been upgraded.

Of course the Audi Quattro is famous for its rally heritage winning the WRC in 1982 and 1984.

Paul Riley has owned this car for just over 11 years and has a fascination with the 1986 rally version, so much so he has slowly evolved the car into the much loved version over the years of his ownership.

Paul has not only decorated the car in racing livery, but he has also completed some important performance upgrades including increasing the engine capacity to 2.3L, fitting an upgraded turbo waste gate together with a fantastic straight through exhaust. He’s also fitted original magnesium wheels that would have been seen on the original rally car.

Paul has actioned a ‘homage build’ in the style of rally version, and as such is not meant for rallying, its creation was designed around road going enjoyment and in 2016 it won the public voted Pride of Ownership award at the NEC Classic Car Show.

The red paint on the car is the original colour.  The orange, silver and black stripes have been professionally painted on top of the original factory paint.

Wheels & Tyres
15in minilite wheels have been fitted to the car and are in good condition.  Tyres are 225/50/15; the NSF tyre is showing more signs of wear as you can see from the images.

Bodywork
All panels are free from dents and the shut-lines across the entire car look visibly correct and both doors close evenly.

Paint
The paint is in good visible condition.  We didn’t use the paint depth gauge on this vehicle due to the fact the stripes have been sprayed and will of course show a higher reading.

Glass and Trim
Glass and trim are all in good order.

The interior plays homage to the rally version as a lot of the road going fittings have been striped out and a roll cage has been fitted.

Seats and Carpets
Sparco bucket seats have been fitted with race harness belts.  Carpets have been stripped out of the car.

Dashboard
The dash covered in alacantara to reduce glare on the the windscreen.  The original LCD gauges are still present and in working condition.  The radio has been removed and could do with a blanking plate fitted.  There is no cigarette lighter.

Steering Wheel / Gear Stick
Both are original and in good condition as highlighted in our media.  The steering wheel was refurbished at the same time the seats were done.

We found no issues on the short run we took with Paul.  We drove about 5 miles and a maximum of 50 mph with a couple of turbo bursts.  The car performed well with no suspension knocks or rattles.

Engine and Gearbox
The car started fine from cold (see video) and idled correctly with no auto-choke issues.  The engine has been modified, i.e. bored out to 2.3l and upgraded turbo waste gate has been fitted.  There was a slight leak in the front radiator during out inspection, however, Paul has confirmed he will fix the leak properly prior to the new owner collecting the car.

Suspension and Brakes
No modifications to the suspension or brakes have been carried out.  Paul did inform us that he has previously changed the bushes to Polybush.

The Drive
The drive was good, gear changing without any issues, and the car handling well. You can see a short clip of the car running on the road, along with some more footage in our “Meet The Owner” video.

Electrics and Other
Paul reports no electrical issues with everything working as it should.  The passenger door external catch is not operational.  Paul reports it’s a linkage that needs fixing and will remedy before sale to the new owner.  The external oil cooler that is fitted on the rear tailgate is not operational, i.e. it is not connect to the engine and is for visual purposes only. 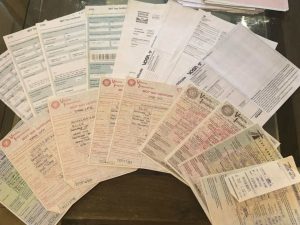 We have checked the VIN number and matches the original paperwork.  We were not able to check the engine / gearbox number on the visit, however, Paul confirms they are both the original units.

This Audi Quattro is an iconic car and Paul has made great progress creating a rally version homage.

Of course, many hours and a lot of money has been spent to get the car to the standard it is today.  So we are looking for a very special new custodian of the car, one that can carry on the good work Paul has done and continue making modifications and alterations to make it better and better.

One thing is certain, there’s not another car like Paul’s and it gets a lot of love and turns heads wherever it goes.

ADAM PURRIER
This auction listing was written by Adam from information gained from Paul (owner and seller of the vehicle) and having visited and photographed the vehicle.

If you have any specific questions about the vehicle then please use the comments section below. Thomas will receive a notification and will reply as soon as he can.