This car is available for a negotiated sale – you can submit an early offer below, or please call 01926 426 635 to speak to me directly about the car.

Make an offer before auction?
Enter your offer below and we’ll get back to you, or call us on 01926 426 635 to contact the seller.
No Fields Found.

The Mini Pick-up (renamed Mini 95 from 1978 onwards) was produced from 1961-1983, this particular year produced by British Leyland. This variant was based on the Mini Van, featuring a longer body of 3.4m in length. The rear of the van cut off and left as an open cargo area, and the cabin built in effect as a 2 door coupe.

The Pick-up is definitely a utility vehicle, even though British Leyland chose to describe it as “fully-equipped” in brochures and marketing. In total over 58,000 Pick-ups were produced.

This particular Mini Pick-up was purchased and used just like it should be; it spent its years delivering goods for a local print publishers that the original owner used to run. Ideal when you think about it for local trips around Leicestershire. The Mini has been in the family ever since, and it’s great to hear stories like this.

Dave inherited this car when his uncle sadly passed away around a year ago. Since then, Dave and his sister Jen have been joint custodians of their former uncles car.

His uncle owned this car from new he believes, and this car was actually used mainly by his aunt. His uncle used and maintained the car up until his later years in life, as can be seen when you look at the MOT history available online.

Dave would probably confess that he is not a classic car enthusiast. But that doesn’t mean that he doesn’t care for the car at all, for both Dave and Jen the cars have a place in their memories from when their uncle and aunt used to use them. Due to a lack of time to use them now, Dave and Jen would like the car to go on to a new home where it will be used once again hopefully.

Dave and his sister Jen have spent some time and money to get the car to a high standard. A full restoration on the body was completed at the start of the year, and now the car looks stunning. You can see images of the work in progress in the media section below.

Having been fully restored, and barely used by Dave and Jen since, the exterior of the car is stunning. Finished in what we believe to be “Old English White”, the Mini Pick-up looks delightful and almost factory fresh.

Wheels & Tyres
Steel wheels with chrome hubcaps, and high walled tyres adorn this Mini Pick-up. They haven’t suffered any serious corrosion, but some of the centre hubcaps have dents in them as can be observed in the media.

Bodywork
Stunning. The car has undergone a professional restoration, take a look at the images showing the work in progress. The bodywork on the car has been repaired with new panels being replaced as needed and important work on the sills completed.

Paint
The paintwork across the car looks lovely. It is even in colour and finish across all the panels, and looks deep and finished to a high quality. We believe the car is finished in Old English White, sadly the chassis plate does not list the paint code.

Glass and Trim
The glass all looks in original condition, and the seals have been replaced as part of the restoration. The glass has been etched with the registration number that Dave and Jens aunt used to use the car with, as was common practice. Dave and Jen have had a new cover made for the cargo area which has no signs of wear.

Finished black on black inside the cabin, some work has been completed to bring the car up to a nice standard from the inside too. The headlining would benefit from being replaced as can be seen in the media.

Seats and Carpets
The seats and carpet are finished in black, with both looking like have been replaced recently. The seats show no sign of wear and the carpet looks a deep black and unworn.

Dashboard
The cars dashboard just features a simple Smiths odometer and speedo. Having reviewed the MOT history, the car looks to have had a new odometer fitted and/or it has suffered from not working correctly as the mileage jumps around.

Steering Wheel / Gear Stick
These look in original condition, take a look at the media detailing the wear on both the steering wheel and gear stick.

We took the Mini Pick-up on a quick blast around the local area. It started from cold on the first attempt, and it was great little trip in the evening sun.

Engine and Gearbox
The engine pulled us along with no issues, starting from cold and idling while hot without issue. No smoke observed, and the engine bay was professionally cleaned down as part of the restoration. Dave took the car through it’s gears with no issues as seen in the video.

Suspension and Brakes
The car felt just like a Mini should as a passenger, firm but fair I would say. There were no knock/rattles heard on our trip, and the car stopped like it should do too.

The Drive
The 998cc engine pulled us along the country roads without fault, building up speed as we worked our way through all the gears.

Electrics and Other
The central dials on the dash worked as expected, and Dave informed us that all other ancillary electrics work. 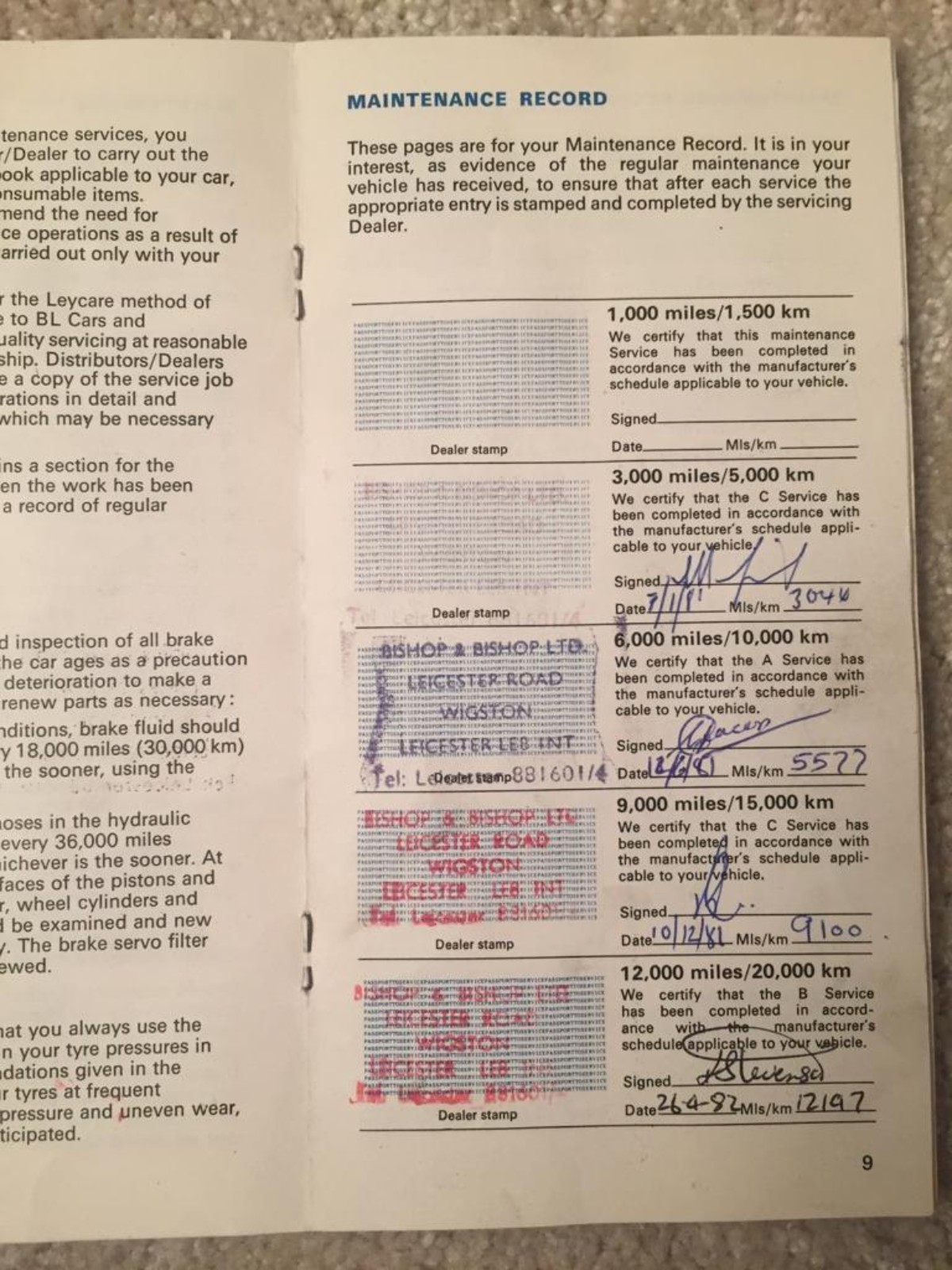 The car has been owned by the family for it’s entire life, and was passed on to Dave and Jen when their uncle passed away. Because of the circumstance the car comes with limited history, but does include the original stamped service book, as can be seen in the media.

The Mini, and all the variants, are British design icons. There is no doubt that they will stand the test of time, and always have a place in peoples’ hearts the world over.

The versatility of this little car was shown in it’s use as a daily driver for the average man, rally race winner, and like this example, a utility vehicle.

This is a great example for someone to cherish with the recent restoration work that Dave and Jen commissioned, and the way it has been taken care of in the family all of its life.

KULRAJ SINGH SALH
This auction listing was written by Kulraj Singh Salh from information gained from Dave and Jen, the owners of the car, and having visited and photographed the vehicle.

If you have any specific questions about the vehicle then please use the comments section below. Dave and Jen will receive a notification and will reply as soon as they can.

Hello any chance that this mini is still for sale

Is the mini pickup still available

Is this still for sale?

Hi, yes we believe it is even though it was some time ago that we consigned the car. The price is £17,000.

Is this 1980 Mini Pickup still for sale?