The 90’s; we miss the 90’s don’t we. Watching the World Rally Championship or the British Touring Cars felt very special. Ogle at the spoiler and splitter clad fire breathing beasts on Sunday, rooting for the marque your family car emanated from.

And on Monday? Admire the road going version of Sunday’s televisual feast from the bus; on the way to school.

‘Road going version’ this may be, but taken to the extreme. Welcome the legend that is now the Escort RS Cosworth, or ‘Cossie’. It doesn’t matter if you are five or fifty five, you still want one.

It was born in an era where manufacturers lived by the rule ‘race on Sunday, sell on Monday’ and were not bound so strictly by emissions and pedestrian crash safety.

Turbo charged, in an obvious ‘wait, here comes the boost’ manner. Whale tail. Aggressive bumpers. Four wheel drive. Mechanical. Intensely rare. Tuneable. Recaro seats. Raw, unhinged and recognisable anywhere in the world as a performance icon. And thus it deserves to be put into perspective in today’s world, not with statistics.

Buy it and park it next to a Prius in the supermarket car park, or even an Ecoboost Focus; feel proud.

We’re really excited to be offering up for auction this very special and rare 1996 Ford Escort RS Cosworth owned by John Cook from Southend-on-Sea.

John is the seller and second owner for the last 13 years and he’s covered just 3k miles in that time.

Take a look at the video here to meet John, learn about what he loves about the car and why he’s selling it.

We visited the car on the 4th of February and were immediately wowed by it. It’s a credit to John and in superb condition, always garaged and only covered a total of just over 30k miles since its registration in May 1996 (supported by MOTs from 1999).

The car is finished in metallic black and black leather wrapped over stunning and supportive Recaro seats.

We think you’ll love this car and bidding will be energetic. If you have any question then write it below and one of our team, or John, will answer for you.

The exterior of the car is in excellent condition and really looks amazing in the metallic black.

Take a look at our video here to see a close up walk around the car.

Wheels
Original five spoke alloys are fitted and are in excellent original condition – never curbed.  There is a small scratched area on the NSR outer edge (see pic). An unused space saver tyre and tool kit is present in the boot.

Bodywork
The bodywork is in excellent condition with no parking dents and the panels all look like factory fit on visual inspection. The doors and bonnet all shut nicely as expected. There are small traces (we mean very small) of bubbling on the wheel arches (see images).

Paint
The paint is in excellent condition and we didn’t notice any visible signs of colour difference (in direct sunlight) or any difference in factory orange peel across the panels.

John has had minor stone chips blown in on the front of the bonnet at some point during his ownership (see picture of paint depth gauge).

There is a small chip in the middle of the OS driver’s door and some small chips on the leading edge of the bonnet. There is also a small masking line on the lower part of the inside ‘B’ posts indicating some paint repair in the distant past.

In summary, we are being fastidious in our write up, however, the paint really does look in excellent condition for a 21 year old car and would look even better with a full polish / wax. 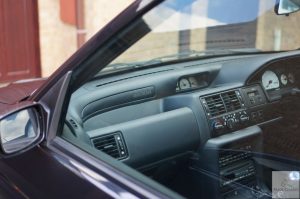 The interior is in excellent original condition with unmarked supple leather on stunning Recaro seats.

Seats and Carpets
All seats are in original condition with wear in line with the 30k miles. Even the front seat bolsters show virtually no signs of wear, as shown in the photos, and the leather is soft and supple.

Carpets are original and show little sign of wear.

Dashboard
All original gauges and no aftermarket additions have been made. There is no waxy coating on the dash, i.e. it’s in its original matt state.

Steering Wheel / Gear Stick
Steering wheel shows little signs of wear, however, the gear stick gaiter does need to be refurbished as the creases have lost the black colour (see pictures).  Also, importantly, John has the original gear stick and will include it in the sale.

We took the car out for a short test drive (4 miles / max 50mph) and observed no issues. It performed faultlessly and felt every bit worthy of the low mileage it’s covered since new.

The video here shows a cold start and short run on an uneven road.

Engine and Gearbox
The car starts first time from cold with no visible signs of smoke and idles as expected. No issues with gear selection from cold in any gear. Turbo boost pressure increased as expected during acceleration and the car felt quick / responsive.  The exhaust tailpipe could do with some attention as shows signs of mild corrosion.  The engine number is inaccessible for photos and we have not seen it ourselves, however, John has confirmed he has personally checked the number when the car was previously up on the ramp and it matches the log book.

The Drive
Gear selection was smooth and no issues with the clutch and drove as expected.

Electrics
John reports all electrics work as expected. John has fitted an aftermarket and period correct CD player that is not powering up. The new owner may wish to either fix or replace with the blanking plate.

John also reports the air conditioning is cold and works as expected. 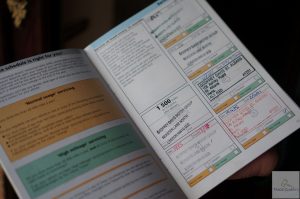 This is a rare and desirable two owner car that has covered on average just 1,500 miles a year, always garaged and looked after by the same owner for the last 13 years; gold dust.

John has all the original keys and the importantly the master keys are present too.

Mileage recorded on HPI check as follows – also, see all previous MOTs (except 2002) in the images below.

Fresh to market cars don’t come around like this one everyday; they really don’t.

As you can probably tell we are in love with this car and its provenance.

We are really excited about this commission, especially after this same spec model sold back in November at auction for a whopping £91k although it was of museum standard.

The market is moving quickly for rare and desirable ‘Fast Fords’ and we have set a very realistic reserve with John as he needs to liquidate the money to pay for some home alterations.

On a final note, we’ll all be looking back at the sale of this car in a few years and wishing we’d bought it. Well except for the lucky owner that will probably make more money than investing in Bitcoin right now!

Want to see this car like you’d see it in real life, in eye popping 3D 4K virtual reality?

Well you can as we are the only classic car auction house to film our high value cars in glorious VR.

There are two ways to watch:

3D – Mobile Phone
Experience glorious 3D by putting your phone into a VR headset & then click on the text links below:

The 3D VR video will then open in your YouTube app – simply select the goggles button and you’re all set.

2D – Laptop / Desktop
Click on the videos below to view in 2D and pan around using your mouse.Top Tip: select a higher resolution in video settings (up to 8k) to see pin sharp quality  – more instructions here.
MORE IMAGES
BID HISTORY

They don’t make these anymore, and you don’t find many in this condition, so will be a great buy for the winning bidder!

Reserve now met, it will be selling tonight to the highest bidder, good luck to those bidding tonight.

Com’on everyone… over 9,000 view of this auction in the last week… who’s got a burning question for John… or perhaps an RS expert? 🙂

Low volume Ford pocket rocket. So much to like with this example

Agree Gary – we had so much interest in this car with over 7k views. Also lots of people saw the auction at the London Classic Car Show and they love ‘Fast Fords’… smart place to put your money at the moment I think.